Scandinavia is a sub-region in Northern Europe, with strong historical, cultural, and linguistic ties. In English usage, Scandinavia can refer to Denmark, Norway and Sweden, sometimes more narrowly to the Scandinavian Peninsula, or more broadly to include the Åland Islands, the Faroe Islands, Finland and Iceland.

The broader definition is similar to what are locally called the Nordic countries, which also include the remote Norwegian islands of Svalbard and Jan Mayen, and Greenland, a constituent country within the Kingdom of Denmark.

This is where Ragnar Lodbrok rapped. A Viking ship docked behind him in his second verse. The Aurora Borealis could be visible throughout the battle in the night sky. In the second verse, it formed a Viking map. Richard the Lionheart appeared here during the lines "for a king who got whacked by a ten year old" and "your real self next to your legend disappoints" during Lodbrok's first verse and Richard's second verse respectively. 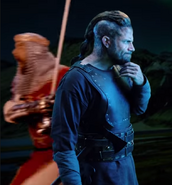 Richard the Lionheart crossing the border into Scandinavia.
Community content is available under CC-BY-SA unless otherwise noted.
Advertisement