Shaka kaSenzangakhona, also known as Shaka Zulu, was born circa 1787, in KwaZulu-Natal, South Africa. He was one of the most influential monarchs of the Zulu Kingdom who led the Zulu warriors.

Shaka was the son of Senzangakhona kaJama, chieftain of the Zulu, and Nandi, an orphaned princess of the neighboring Langeni clan. Because his parents belonged to the same clan, their marriage violated Zulu custom, and the stigma of this extended to the child. The couple separated when Shaka was six, and Nandi took her son back to the Langeni, where he passed a fatherless boyhood among a people who despised his mother. When Shaka was 23, Dingiswayo, the Mthethwa paramount chieftain, called up Shaka's Dletsheni age group for military service. For the next six years, he served with brilliance as a warrior of the Mthethwa Empire.

After Senzangakhona's death in 1816, Dingiswayo released Shaka from service and sent him to take over the Zulu; his first act was to reorganize the army. Like all the clans, the Zulu were armed with oxhide shields and spindly throwing spears. Shaka developed standard tactics, which the Zulu used in every battle. He fought for extermination, incorporating the remnants of the clans he smashed into the Zulu. He first decimated the small clans in his vicinity, starting with the Langeni; he sought out the men who had made his boyhood a misery and impaled them on the sharpened stakes of their own kraal fences. In less than a year, the Zulu and their army had quadrupled in numbers. In 1817, Dingiswayo was murdered and the last restraint on Zulu expansion was removed.

In 1827, Nandi died, and with his mother's death, Shaka became openly psychotic. About 7,000 Zulus were killed in the initial paroxysm of his grief, and for a year no crops were planted, nor could milk, the basis of the Zulu diet staple, be used. All women found pregnant were slain with their husbands, as were thousands of milch cows, so that even the calves might know what it was like to lose a mother. His half-brothers, Dingane and Mhlangana, together with an induna named Mbopa, assassinated Shaka at the age of 41 on September 22nd, 1828, in KwaDukuza, South Africa.

[Note: Shaka Zulu is in dark yellow, while the Zulu warriors are in regular text.]

Who thinks he can dance with Conan of the Savanna,

But when I go hand-to-hand with you, I go hammer!

Knock off his dome, wrap it up in his own banner!

Send it back to Rome with a message from the Zulu!

If you battle Shaka, this what happen to you!

If you cross that Equator, you'll head straight into a massacre,

And get fucked by more than just Cleopatra in Africa!

Right, I've heard of your play. Tell me, how does it end?

Oh yes! You get stabbed many times by your friends!

So whatcha gonna do with your Roman swords?

When the lines of your legions get gored by the horns

Of the Zulu warriors! Trained on thorns

I got the strength of a lion and the speed of a cheetah,

And everyone knows you're just a chicken, Caesar!

Shaka Zulu and the Zulu warriors' in the Bull Horn formation 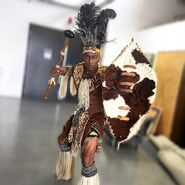 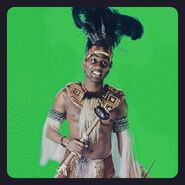 Another picture of Shaka Zulu in front of the green screen from EpicLLOYD's Instagram account
Add a photo to this gallery
Retrieved from "https://epicrapbattlesofhistory.fandom.com/wiki/Shaka_Zulu?oldid=1450632"
Community content is available under CC-BY-SA unless otherwise noted.