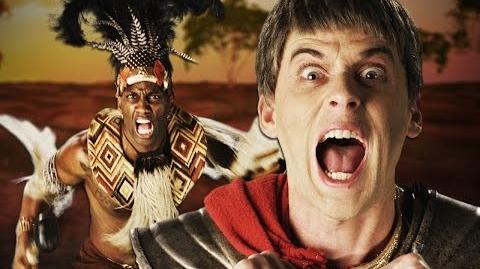 The African Savanna
The Roman Forum

Shaka Zulu vs Julius Caesar is the fifty-sixth installment of Epic Rap Battles of History and the eleventh episode of Season 4. It features Zulu king, Shaka Zulu, against Roman dictator, Julius Caesar. It was released on July 20th, 2015.

Klarity as the Zulu warriors (cameo)

EpicLLOYD as the Roman soldiers (cameo)

[Note: Shaka Zulu is in dark yellow, Julius Caesar is in red, the Zulu warriors are in brown, and the Roman soldiers are in silver.]

Who thinks he can dance with Conan of the Savanna,

But when I go hand-to-hand with you, I go hammer!

Knock off his dome, wrap it up in his own banner!

Send it back to Rome with a message from the Zulu!

If you battle Shaka, this what happen to you!

If you cross that Equator, you'll head straight into a massacre,

And get fucked by more than just Cleopatra in Africa!

You talk a lot of shit for a man wearing a diaper.

I heard you had poison spit. Where was it in this cypher?

'Cause all I hear is threats from a brute with no discipline,

And I'm ruling over you like a boot full of my citizens!

You should take your cow skin shield and hide under it!

You're fucking with the most triumphant third of the Triumvirate!

I'm first of the empire and last of the republicans,

And hunting you, accompanied by legions of my countrymen!

(Ooh!) Ask my kidnappers if I'm just a shit talker.

So don't go rattling your sticks at me!

If I wanted to shake spears, I'd waggle my biography!

Right, I've heard of your play. Tell me, how does it end?

Oh yes! You get stabbed many times by your friends!

So whatcha gonna do with your Roman swords?

When the lines of your legions get gored by the horns

Of the Zulu warriors! Trained on thorns

I got the strength of a lion and the speed of a cheetah,

And everyone knows you're just a chicken, Caesar!

Oooh, can I be a hyena? 'Cause I'm going to laugh!

I'll pave roads with the bones of your goat-herding ass!

First, my front lines will drop back and spank you in the chest,

Then I'll decimate your horns; you can't outflank the best!

Let your reserves come at me. My ballista's cocked and ready!

When I take aim, I always keep my whole crew steady!

Because there's no use in murdering you and your heathen.

You can grow my wheat for me after you're beaten.

Mad rhymes are doper than any verse you ever kicked, 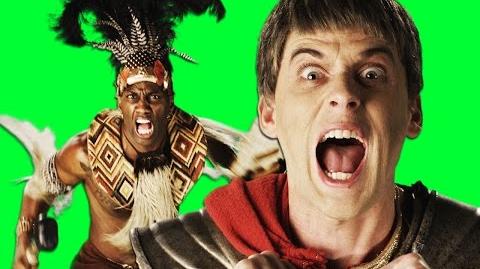 Shaka Zulu vs Julius Caesar. Behind the Scenes of Epic Rap Battles of History 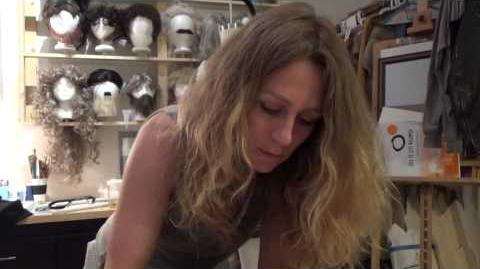 Shaka Zulu vs Julius Caesar. Behind the Scenes of Epic Rap Battles of History pt. 2 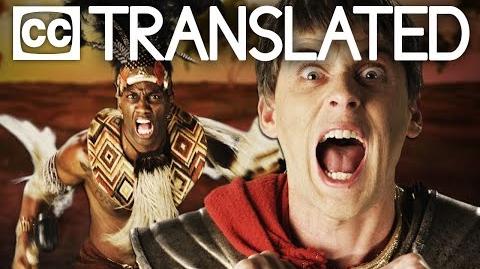