Shaun Lewin portrayed one of Blackbeard's pirates and one of Al Capone's gangsters in Blackbeard vs Al Capone, a High Elf in J. R. R. Tolkien vs George R. R. Martin, and himself in Nice Peter vs EpicLLOYD 2. He also did the poses for the shirt Ted "Theodore" Logan wore in Lewis and Clark vs Bill and Ted, which then had the Wright Brothers and the Mario Brothers' faces photoshopped onto them.

Shaun Lewin is a former intern, production assistant/coordinator, and associate producer for the Epic Rap Battles of History crew. He worked on the series from Adam vs Eve to Nice Peter vs EpicLLOYD 2.

Lewin made a cameo appearance as a part of the frustrated crew during EpicLLOYD's first verse when he said the line, "ERB2 is right! I'm covering your ass behind the scenes!"

Shaun Lewin as a pirate

Shaun Lewin as a gangster

Shaun Lewin as a High Elf 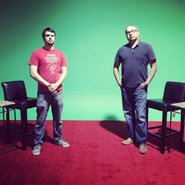 Shaun Lewin and Atul Singh standing in front of a green screen set for Washington University in St. Louis
Add a photo to this gallery
Retrieved from "https://epicrapbattlesofhistory.fandom.com/wiki/Shaun_Lewin?oldid=1471825"
Community content is available under CC-BY-SA unless otherwise noted.