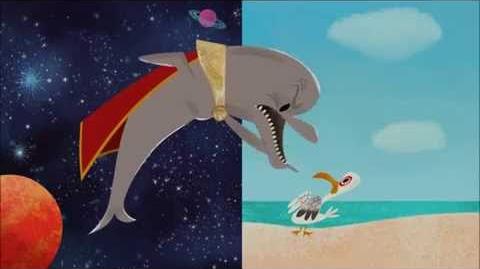 The SpongeBob Movie Rap Battle is an unofficial rap battle made by Nice Peter and EpicLLOYD. It features a dolphin named Bubbles rapping against a seagull and his flock. It was released on February 6th, 2015, as part of the movie, The SpongeBob Movie: Sponge Out of Water. The battle takes place at the end of the movie, as Bubbles becomes irritated at the seagulls playing and singing along to the theme song of SpongeBob SquarePants.

[Note: No live action was used in this rap battle. All characters were animated.]

Matt Berry as Bubbles (voice only)

EpicLLOYD as a seagull (voice only)

Nice Peter as Painty the Pirate (voice only, cameo)

[Note: Bubbles is in orange, the seagull is in gray, the back-up seagulls are in yellow, and Painty the Pirate is in brown.]

You're an inferior species! What could you know about taste?

You get excited by a pile of trash on a plate!

Saving the patties in the past, but now I'm rapping ya!

That song's so bad that I can't even stand it!

Dispense with this nonsense at once. I demand it!

You all stand no chance against my power; don't try it!

Just sit there with your flappy beak shut, and be quiet!

Hold up, fish guts! You can't insult us! The seagull crew!

We're in no mood to hear *dolphin click* from you!

You got your nose on your head! You blow up when you sneeze!

Hey, why's this guy so mean? 'Cause he's older than a fossil.

All alone up in space. Yeah, that must be awful!

Yar! Knock it off! You're making the movie too long!

Why don't you take us back in time so we can finish our song?

[Bubbles teleports them back to when they were singing the SpongeBob SquarePants theme song.]