Stanley Kubrick was born on July 26, 1928, in New York City, New York. He is a British-American film director, screenwriter, and cinematographer. His works are noted for their realism, unique cinematography, extensive set designs, and evocative use of music.

In 1950, Kubrick began to explore the art of filmmaking. Over his career, he has directed thirteen theatrical releases, including The Shining, A Clockwork Orange, Dr. Strangelove or: How I Learned to Stop Worrying and Love the Bomb, Full Metal Jacket, and most notably, 2001: A Space Odyssey, often considered one of the greatest movies ever made. Kubrick received thirteen Academy Award nominations throughout his life, winning one for his special effects work in 2001: A Space Odyssey.

After moving to England in the early 1960s, Kubrick slowly gained a reputation as a recluse. He gradually reduced the time he spent anywhere other than on a studio set or in his home office, refused most interview requests, and was rarely photographed. A demanding prefectionist, he assumed control over most aspects of the filmmaking process, from directing and writing to editing, and took painstaking care with researching his films and staging scenes, working in close coordination with his actors and other collaborators. After the technology at the time did not meet Kubrick's desire, he handed directorial duties of A.I. Artificial Intelligence over to his friend and fellow director, Steven Spielberg after his death from a heart attack on March 7, 1999, in St Albans, Hertfordshire, England.

Kubrick is frequently cited as one of the greatest and most influential directors of all time and an inspiration for many directors working today. His films are widely referenced in popular culture, often getting paid homage to in movies and shows.

Genius is a powerful word, but there's no reason to use it,

'Less you're talking about the Kubrick, then there's really nothing to it.

Everything I do is visionary.

Every single frame a painting made exactly how I wanna make it.

Do another take and get it right, 127 times!

I'll make you learn to love me! I'm the bomb; drop ultraviolent rhymes!

Like Clockwork, make you all hurt; beat Spielberg The Color Purple!

A.I. is the worst waste of potential since the Ninja Turtles!

Kubrick riding a tricycle in the Overlook Hotel

Kubrick's scrapped background in the Behind the Scenes 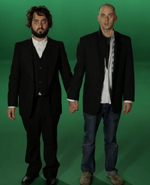 Two Kubricks, Peter as a stand-in, holding each other's hand before the final edit
Add a photo to this gallery
Retrieved from "https://epicrapbattlesofhistory.fandom.com/wiki/Stanley_Kubrick?oldid=1464319"
Community content is available under CC-BY-SA unless otherwise noted.