The Stay Puft Marshmallow Man is a fictional character from the Ghostbusters franchise, which sometimes appears as a giant, lumbering paranormal monster. It first appears in Ghostbusters as a picture logo on a prop package of marshmallows in Dana Barrett's apartment, on a graffiti advertisement on the building next to the Ghostbusters' headquarters, and then in the climax of the film as the physical manifestation of the Sumerian deity Gozer, who takes such a form due to Ray Stantz's unsuccessful mental attempt to think of the least-threatening thing possible when told that the villain would destroy the Ghostbusters in the form of the first thing they thought of.

Along with the Ghostbusters logo, the image of the Stay Puft Marshmallow Man has become one of the most recognizable emblems of the franchise.

[Note: The Stay Puft Marshmallow Man is in gray, while Kari Byron and Jamie Hyneman are in regular text.]

I smother Ghostbusters in fluffernutter. I don't play!

I live so large you can't harsh my mellow.

Just one step took me out the ghetto!

You best be afraid of my marshmallow flows

'Cause Big Puft just turned all you bitches to toast!

Raise up, Stay Puft and I'm coming in!

I'll flip skeptics till they're butter-side up,

And shred your street cred like a cannonball, what!

You punk busters better watch who you're summonin'!

Raise up, it's Stay Puft and I'm coming in!

(Uh!) Flip skeptics till they're butter-side up!

Ghostbusters get covered in fluffernutter spray!

So watch a real rapper rock a beret!

My marshmallow flows turn these bitches to toast,

Show you all better be afraid of Big Puft! 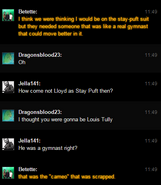 Mike Betette explaining on chat why he wasn't the one to portray the Stay Puft Marshmallow Man
Add a photo to this gallery
Retrieved from "https://epicrapbattlesofhistory.fandom.com/wiki/Stay_Puft_Marshmallow_Man?oldid=1439703"
Community content is available under CC-BY-SA unless otherwise noted.