Stedman Graham made a cameo appearance in Oprah Winfrey vs Ellen DeGeneres. He was portrayed by Atul Singh and voiced by EpicLLOYD.

Stedman Graham, Jr. was born on March 6th, 1951, in Whitesboro, New Jersey. He is an educator, author, businessman and speaker, although he is generally known as being Oprah Winfrey's partner.

Stedman first appears at the beginning of Ellen DeGeneres' first verse during the line, "How do I tell my friend Oprah she's gonna get more whipped than Stedman?" He then reappears at the very end where he finishes Oprah Winfrey's last line by saying "You can't go back!" in an auto-tuned voice. 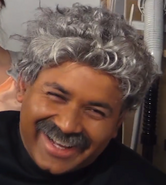 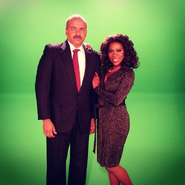 A picture of Atul dressing as Stedman and Nikki Jenkins as Oprah Winfrey posted in the official ERB Instagram account
Community content is available under CC-BY-SA unless otherwise noted.
Advertisement