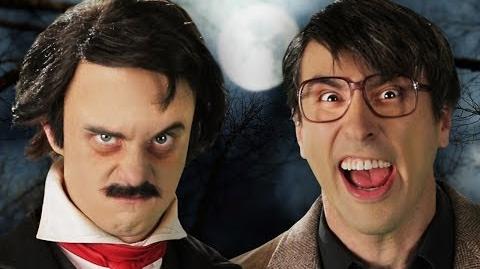 Stephen King vs Edgar Allan Poe is the forty-second installment of Epic Rap Battles of History and the ninth episode of Season 3. It features the King of Horror, Stephen King, rapping against influential 19th century poet and horror author, Edgar Allan Poe. It was released on June 2nd, 2014.

Once upon a midnight dreary, as I spit this weak and weary,

I will choke this joker with a trochee till his cheeks are teary! (Ahh!)

But y'all don't hear me! All should fear me!

I'll forever be better; you'll never be near me.

Your books are as eerie as Beverly Cleary!

You're a faux Bram Stoker, so scram, the show's over!

(Snap!) I wrote them locked in a cave, while I sobbed in a rage.

The Tell-Tale Heart beats soft in its grave while this jerk just beats off on a page!

Oh, you want to talk shop, you gothed-out fop?

Go back to Hot Topic and shop for a top!

In the King's house; now watch the Castle Rock!

I'm a workaholic with a fiction addiction!

Feel that Rage and Misery!

You better start Running, Man! You're in deep poo, Poe!

Tommyknock you down till you can't Stand up!

You're as soft as Po, the Kung Fu Panda!

Racks on racks 'cause I pen fat stacks of frightening writing; have you seen the pile?

I can even take a break from my routine style!

Crank out a Shawshank or a Green Mile!

Pit and the Pendulum? Not even unnerving.

Stephen, you pretend to do it, I've been really living through it: misery and poverty and family woes!

I see through you like pantyhose, doing Chappelle and Simpsons cameos! (Ahh!)

Even if you're gripping on a weapon, then you better get to stepping if you're messing with the horror lord!

In a minute maybe I'mma hit him, cut him into itty bitty bits, and I'mma stick him in the floorboards!

*sigh* Speaking of bored, you're the worst!

Dropped out of school, but you can't drop a verse!

I could have spent that time better.

In eight bars, I can write a whole best-seller!

I'm so prolific! This sickly goblin won't be bothering me! I'm on a clobbering spree,

And I'll be smacking you with any of the big thick books in my big dick bibliography!

See, I'm the author with the blood and gore lore galore that'll horrify a reader to the core! 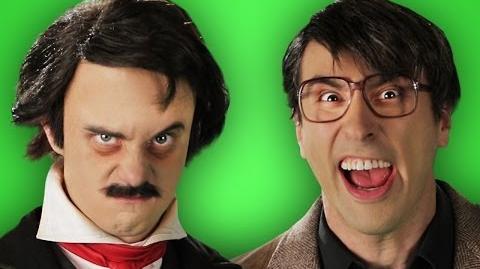 Stephen King vs Edgar Allen Poe. Behind the Scenes of Epic Rap Battles of History. 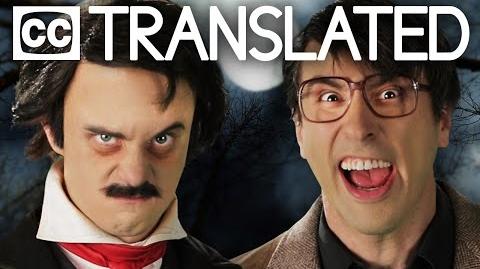