Stephen Robert "Steve" Irwin was born on February 22nd, 1962, in Essendon, Victoria, Australia. He was a zookeeper, conservationist, and television personality. Irwin achieved worldwide fame from the television series The Crocodile Hunter, an internationally broadcast wildlife documentary series which he co-hosted with his wife Terri.

On September 4th, 2006, Irwin was killed after being pierced in the heart by a stingray barb while filming an underwater documentary film titled Ocean's Deadliest.

Holy smokes, what a place to go!

You'd need a submarine for a blow that low! (Awhh!)

'Cause crikey, I'm going from 'croc' to 'Jacques' hunter!

Have a look at this salty fella,

His face looks like it's made of pure leather!

Look out! He's got the body of a naked mole-rat!

He's cranky 'cause he has to wear a Papa Smurf hat!

I'm a wild man, you're a subdued sub-dude!

The only crocs you could handle are some slip-on shoes!

And crikey, you're such a boring guy,

You could make a whole show about the ocean dry!

But with the sheilas you sure had fun!

Your mistress was as young as your first-born son!

You never should have stepped to the wildlife defender,

Would you rather talk about your brother? Ooh boy!

Where ya going, fella? Hang on a minute,

Like a joey in a pouch, this ain't quite finished!

Take a look how destructive your old films are:

If you wanna count fish, please take the reef tour!

I'm the gold medal rhymer on the podium,

So go back down under with your crew, 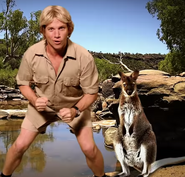 Irwin with a wallaby 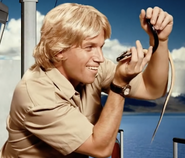 Irwin with a constrictor snake
Add a photo to this gallery

Retrieved from "https://epicrapbattlesofhistory.fandom.com/wiki/Steve_Irwin?oldid=1456076"
Community content is available under CC-BY-SA unless otherwise noted.