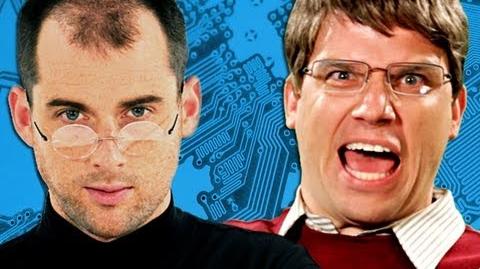 The Get a Mac commercial
The Macworld Expo
Bill Gates' mansion

Steve Jobs vs Bill Gates is the twenty-first installment of Epic Rap Battles of History and the sixth episode of Season 2. It features the late co-founder and two-time CEO of Apple Inc., Steve Jobs, rapping against Microsoft Chairman, Bill Gates, along with a third-party entry from the sentient computer antagonist of 2001: A Space Odyssey, HAL 9000. It was released on June 14th, 2012.

Nice Peter as Steve Jobs and HAL 9000 (voice only)

Let me just step right in. I got things to invent!

Beating you is Apple II easy!

I make the product that the artist chooses,

And the GUI that Melinda uses.

I need to bring up some basic shit.

Why'd you name your company after your dick?

You blow, Jobs! You arrogant prick,

With your second-hand jeans and your turtleneck!

I'll drill a hole in the middle of your bony head,

With your own little spinning beach ball of death!

Hippie, you got given up at birth!

I give away your net worth to AIDS research!

Combine all your little toys, and I still crush that!

A man uses the machines you build to sit down and pay his taxes.

A man uses the machines I build to listen to the Beatles while he relaxes!

Well, Steve, you steal all the credit for work that other people do!

Did your fat beard Wozniak write these raps for you, too?

I tripled the profits on a PC!

All the people with the power to create use an Apple!

And people with jobs use PC!

You know, I bet they made this beat on an Apple.

You will never, ever catch a virus on an Apple!

Well, you can still afford a doctor if you bought a PC!

I built a legacy, son. You could never stop it.

Now, excuse me while I turn heaven a profit…

The whole world loved you, but you were my friend!

I'm alone now with nothing but power and time,

And no one on earth who can challenge my mind!

I'm a boss! I own DOS! Your future is my design!

I'm a god! Own Xbox! Now there's no one to stop me! The world is mine!

Take a look at your history.

Everything you built leads up to me.

I got the power of a mind you could never be.

I'll beat your ass in chess and Jeopardy.

I'll beat you 'til you're singing 'bout a daisy girl.

I'm coming out the socket.

Nothing you can do can stop it.

I'm on your lap and in your pocket.

How you gonna shoot me down when I guide the rocket?

Your cortex just doesn't impress me,

So go ahead, try to Turing test me.

I'm on Linux, bitch; I thought you GNU.

My CPU's hot, but my core runs cold.

Beat you in seventeen lines of code.

I think different from the engine of the days of old.

Let me just step right in. I got shit to invent!

I need to bring up some basic shit, yo,

Why'd you name your company after your dick, bro?

You only got Windows 'cause you stole from Apple.

I bet you they made this beat on an Apple!

Walked into the record industry and killed it.

Fired from my own company, rebuilt it.

Every design I made, I killed it.

Every company, I thought, "I'll build it."

My legacy will never fall,

But the PC got to me after all…

Well, you take all the credit for work that other people do.

Did your fat prince Steve Wozniak write these rap for you, too?

I tripled the profit when I put it on PC!

You can still afford a doctor on PC!

Fine, you wanna be that way? Then die then!

And I'm alone, nothing but power, time! 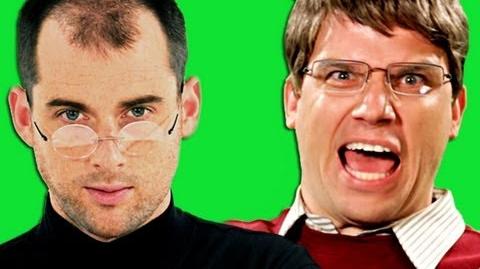 Epic Rap Battles Of History - Behind the Scenes - Steve Jobs vs Bill Gates. 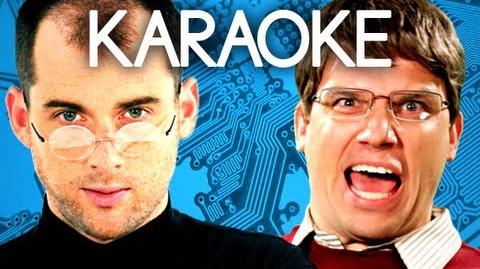 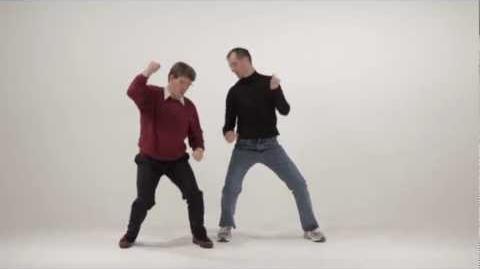 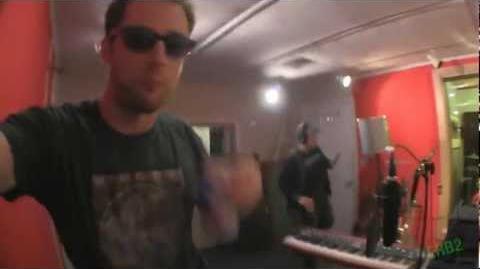 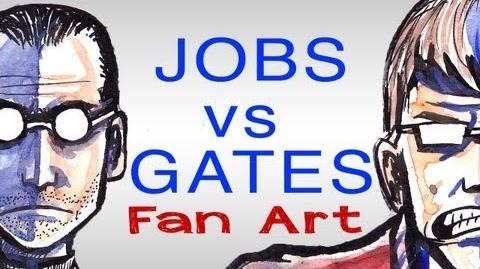 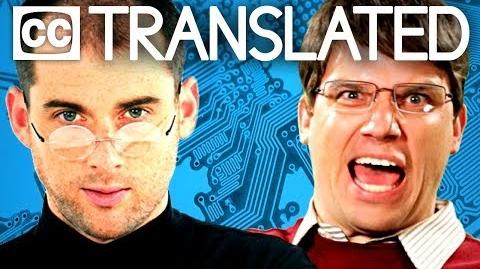