Steven Allan Spielberg was born on December 18th, 1946, in Cincinnati, Ohio. He is an award-winning director, filmmaker, and producer. As a child, he was an amateur filmmaker, but his highly praised television film, Duel, gave him the opportunity to direct for a cinema, which lead him to becoming the most commercially successful director of all time.

Spielberg's first film he ever made was a short film called Amblin'. Although not a complete commercial success, it did start his career as a director. Spielberg's early science-fiction and adventure films, such as Jaws, the Indiana Jones series, E.T. the Extra-Terrestrial, and Jurassic Park were seen as archetypes of modern Hollywood blockbuster filmmaking. In later years, his films began addressing humanistic issues, such as the Holocaust, with Schindler's List, the transatlantic slave trade, with Amistad, war, with Saving Private Ryan, and terrorism, with Munich. Spielberg is also one of the co-founders of DreamWorks Studios. 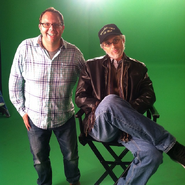