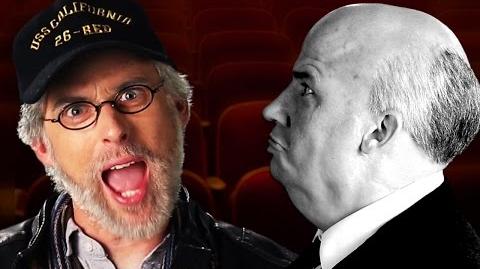 That was a close encounter of the turd kind,

But there won't be a pretty ending this time.

Half your billions should go to John Williams!

Now brace yourself as I reveal my brilliance!

I'm the master…of suspense, so intense,

No defense against Hitchcock once he presents! (Ahh!)

You're more horrible than Megan Fox's acting in Transformers!

C'mon! Fish puppets and Muppets to stir the fears up!

I squeeze screams out of chocolate syrup!

I'm the best mamma-jamma ever stood behind the camera!

Damage panderers and haunt you like the last Indiana!

Alfred, you got no style, dog. I'm the king of dialogue!

There's only one movie I know you from,

And I've seen more blood in the shower when I stubbed my toe in one.

You tried to fight in World War I but couldn't do that.

The British Army wouldn't let you join 'cause you were too fat!

Look it up; it's a true fact. Wikipedia that!

Now allow me to attack Steven the hack.

Due to War of the Worlds, a failure's what I label you.

It looked like some sellout bullshit Michael Bay would do!

The scripts that I write ain't the…cleanest, (Fuck!)

A bad mother fucker from the wallet to the penis!

Genius is a powerful word, but there's no reason to use it,

'Less you're talking about the Kubrick, then there's really nothing to it.

Everything I do is visionary.

Every single frame a painting made exactly how I wanna make it.

Do another take and get it right, 127 times!

I'll make you learn to love me! I'm the bomb; drop ultraviolent rhymes!

Like Clockwork, make you all hurt; beat Spielberg The Color Purple!

A.I. is the worst waste of potential since the Ninja Turtles!

That's enough! I've heard enough crap from all of you!

Why don't I come down there and show you what a real star can do?

I swoop low with the telephoto; no Bruckheimer, I work solo.

If there's one thing I've learned, bitch, this game is about mother fucking money!

I make that dollar, y'all, mother fucking money!

I set up shop and got a few drops of that Got Milk money!

Rose to The Rock, now I got that socks made of silk money!

I ain't got that guilt money! I don't give a fuck!

I take my checks to the bank, and I sign 'em with my nuts!

I give the people what they love while the critics say I'm evil!

Got no time to read reviews while I'm working on the sequel!

Got a gift from above and the eyes of an eagle!

When it comes to blowing up, no director is my equal!

Well that was a close encounter

of the turd kind

But there won't be a happy little ending this time

Against Hitchcock once he presents

You wouldn't be anything without me

I'm the one who invented all your best techniques!

fish puppets and Muppets to stir the fear up

I can squeeze screams from some chocolate syrup

You're as boring to watch as dialogue in Transformers

you may be worth billions,

But half that cash should go straight to John Williams

And not to put your pictures into black and white

Got paid for Amistad, right? Yikes.

ever stood behind a cameras 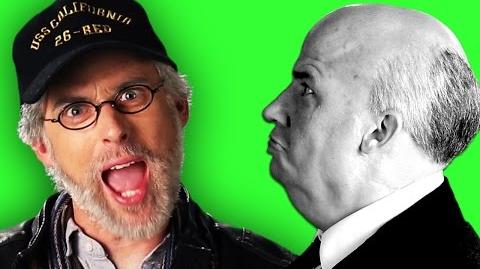 Steven Spielberg vs Alfred Hitchcock. Behind the Scenes of Epic Rap Battles of History 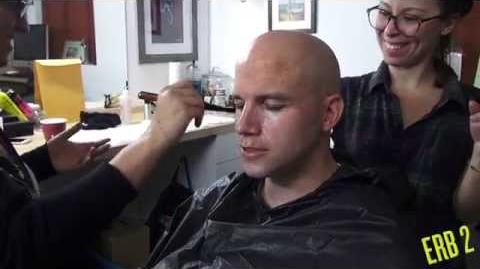 Steven Spielberg vs Alfred Hitchcock. Behind the Scenes of Epic Rap Battles of History pt. 2 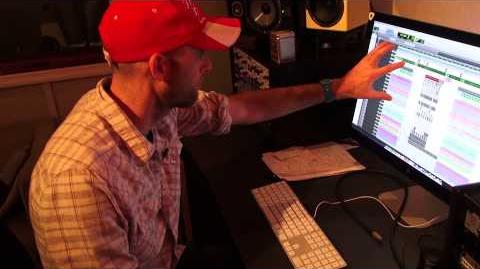 Steven Spielberg vs Alfred Hitchcock. Behind the Scenes of Epic Rap Battles of History pt. 3 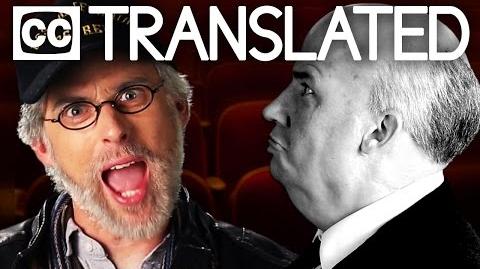