Sun Tzu, also rendered as Sun Zi, was a Chinese military general, strategist, and philosopher who lived in the Spring and Autumn period of ancient China. The name he is best known by is actually an honorific which means "Master Sun". His birth name was Sun Wu, and he was known outside of his family by his courtesy name Changqing. He is traditionally credited as the author of The Art of War (孫子兵法), an extremely influential ancient Chinese book on military strategy. Sun Tzu has had a significant impact on Chinese and Asian history and culture, both as the author of The Art of War and as a legendary historical figure.

[Note: Sun Tzu is in red, while Confucius and Lao Tzu are in regular text.]

Confucius say you can all hold these fortune cookies!

[Note: Sun Tzu is in red, while Confucius and Lao Tzu are in regular text, all three philosophers rapping together is in italics.]

Bro, enough with the riddles, I don't mean no disrespect! 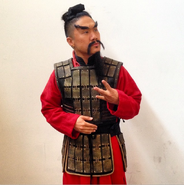 Sun Tzu behind the scenes
Add a photo to this gallery

Retrieved from "https://epicrapbattlesofhistory.fandom.com/wiki/Sun_Tzu?oldid=1481603"
Community content is available under CC-BY-SA unless otherwise noted.