Superman battled Goku in Goku vs Superman. He also made a cameo appearance through reused footage in The Joker vs Pennywise and Dis Raps For Hire - Season 2 Episode 10: Brandon. He was portrayed by EpicLLOYD on all occasions.

Superman originally appeared in Action Comics #1 in the year 1938, making him one of the earliest superheroes. He was created by Jerry Siegel and Joe Shuster.

Kal-El is an alien from the ancient planet of Krypton, who was launched into space towards Earth as a child during the planet's destruction, by his parents Jor-El and Lara Lor-Van. Upon his arrival on Earth, Kal-El was adopted and raised by Jonathan and Martha Kent from Smallville, Kansas, who named him Clark Kent.

As an adult, Kent works for the Daily Planet, a newspaper company based in Metropolis, Kansas, and has relations with fellow reporter, Lois Lane, and is friends with photographer, Jimmy Olsen. As Superman, he fights powerful villains, such as Lex Luthor, General Zod, Darkseid, Doomsday, Brainiac, Bizarro, Parasite, Mongul, and more.

Unlike many superheroes, Superman was born with his powers which are activated by the radiation of the Earth's yellow sun, as a result of Kryptonians becoming accustomed to the radiation of their red super-giant, Rao. Superman's abilities include (per incarnation): super strength (can lift a minimum of 200 quintillion tons), flight, invulnerability, super speed (can travel faster than the speed of light), heat vision, freeze breath, X-ray vision, superhuman hearing, and a healing factor. Superman's powers can famously temporarily be weakened or removed completely with a long exposure to the element Kryptonite, which can only be found in deep space in the remains of the planet Krypton. His powers are also weakened by any type of magic.

Superman is arguably the most famous superhero of all time, and is continuously gaining wide-spread fame and admiration through several comic books, television shows, movies, and video games. He has become a global icon for the flawless man and the American man, especially during World War II, and the Superman crest is one of the most widely recognized symbols worldwide. He was famously portrayed on film in the Superman franchise from 1978 to 1987 by Christopher Reeve. He was also portrayed by Brandon Routh in Superman Returns, and has been most recently portrayed by Henry Cavill in the DC Extended Universe, starting with Man of Steel.

[Note: Superman is in blue, while Jimmy Olsen is in regular text.]

Who can stop this constipated jock,

With the awful animation and the complicated plot?

Who's got the rap bombs to drop on Japan?

This looks like a job for the OG! Superman!

I'm killin' it; you're Krillin it! I'm villainous to vegetables

Who dance around in hammer pants that hide their tiny genitals!

My level is incredible! I'm out of your league!

You want justice? I'll bust this nut up in your Chi-Chi!

With one breath, I'll freeze your whole measly species!

You're primitive and limited. You live in a village of idiots!

(Ha ha!) Your rapping is weaker than your fight scenes!

Just one punch and over nine thousand screams!

From Z to GT, you can Dragon Ball deez! 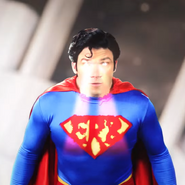 Superman attacking Goku as shown in the behind the scenes 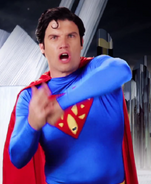 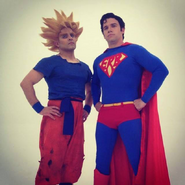 Goku and Superman standing side by side
Community content is available under CC-BY-SA unless otherwise noted.
Advertisement