The Teenage Mutant Ninja Turtles battled the Renaissance Artists in Artists vs TMNT. They are a team consisting of Leonardo, Raphael, Donatello, and Michelangelo. They were all voiced by Nice Peter; Leonardo, Donatello, and Michelangelo were also voiced by EpicLLOYD, who physically portrayed them with Xin Wuku as the stunt double. Furthermore, Michelangelo appeared as a cameo in Dis Raps For Hire - Season 2 Episode 10: Brandon, in which he was also portrayed by Lloyd.

The Teenage Mutant Ninja Turtles (often shortened to TMNT or Ninja Turtles) are a fictional team of four teenage anthropomorphic turtles who were mutated from the ooze in the sewers after a boy accidentally dropped his baby turtles in it. Named after the Renaissance artists, they were trained by their anthropomorphic rat sensei named Master Splinter in the art of ninjutsu. Leonardo is the leader of the group, Donatello is the intellectual one, Michelangelo is the comic relief one, and Raphael is the tough and serious one. From their home in the storm sewers of New York City, they battle petty criminals, evil overlords, mutated animals, and alien invaders while attempting to remain isolated from society. Their main villain is the Shredder, who leads the Foot Clan. The Turtles are allies with vigilante Casey Jones and reporter April O'Neil.

The characters originated in the Teenage Mutant Ninja Turtles comic book in 1984, created by Kevin Eastman and Peter Laird, before their expansion into a cartoon series, films, video games, toys, and other general merchandise. During the peak of the franchise's popularity in the late 1980s through the early 1990s, it gained considerable worldwide success and fame.

[Note: Leonardo is in blue, Donatello is in purple, Raphael is in red, and Michelangelo is in orange. All turtles rapping at the same time is in regular text.]

The wisdom of our master (Splinter)

Taught us not to rush to violence, (Master Splinter)

But our master (Master Splinter)

I don't think you wanna mess with my katana blades!

Get back in your floppy helicopter, fly away!

I can Bebop and Steadyrock a mic, sucka!

Put you back in school with the tip of my two sai!

(Uhhh…) Dona-tell me who you are again, dude,

'Cause I don't Gattamelata clue what you do.

Yo, go ahead and hate. We'll just skate on by!

Chowing on your tower made of pizza! Save a slice for me! 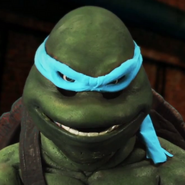 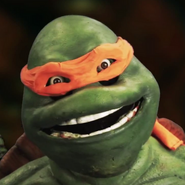 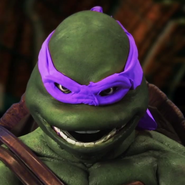 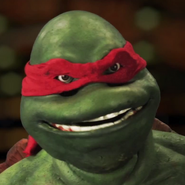 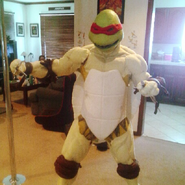 The TMNT costume at an early stage 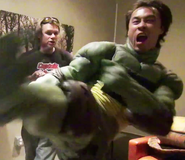 Xin Wuku in the TMNT suit next to Dragan Radic
Add a photo to this gallery
Retrieved from "https://epicrapbattlesofhistory.fandom.com/wiki/Teenage_Mutant_Ninja_Turtles?oldid=1465423"
Community content is available under CC-BY-SA unless otherwise noted.