Donald Trump vs Ebenezer Scrooge is the thirty-ninth installment of Epic Rap Battles of History and the sixth episode of Season 3. It features American business magnate, Donald Trump, rapping against Charles Dickens' A Christmas Carol protagonist and miser, Ebenezer Scrooge, with American banker and financier, J. P. Morgan, hip-hop artist, Kanye West, and another A Christmas Carol character, the Ghost of Christmas Yet to Come, all rapping against Scrooge during the battle. It was released on December 19th, 2013.

Kai and Naya Berman as Ignorance and Want (cameos)

Donald Trump, who lived his life like Scrooge currently is living his, comes to warn Scrooge of what is to come if he continues to live such ways, warranting him visits from "ghosts" to show him examples of what's to come. After he leaves, J. P. Morgan appears to Scrooge as the "Ghost of Rich Dudes' Past" to remind him of how classy rich folks were in the past and for Scrooge to turn his life around. Then Kanye West, the "Ghost of What's Right Now" appears to represent the modern rich man, who, although a jerk, takes notice of the people before him. Finally, the Ghost of Christmas Yet to Come arrives as a final warning, telling him that he will die with remorse if he doesn't amend himself. Scrooge repents and promises to change his ways, thanking the ghosts.

[Note: Donald Trump is in orange, Ebenezer Scrooge is in dark blue, J. P. Morgan is in light brown, Kanye West is in gray, and the Ghost of Christmas Yet to Come is in green.]

Even Jay-Z knows what a pimp I am!

I got my name on the front of the business, man!

My raps will haunt you; make you think you're going insane!

You're about to get whooped by three emcees of the ethereal plane!

How dare you disturb me when I'm napping in my chair!

You're a crappy rap-spitting apparition! I ain't scared

Of this random phantom! Haunt all you want; I don't care!

I do not believe in ghosts and I don't believe that hair!

Don't panic, Scrooge, but you're about to crash!

I'm J. P. Morgan, the Ghost of Rich Dudes Past,

Who's properly rocking the Monopoly mustache!

Yo, I own the railroad; I run these tracks!

You got dumped on a bench; now you're pissed at the world!

You should have made like Sebastian and kissed the girl,

Because your greed is the curse that's gonna tear you apart!

What good is your purse if you're poor in your heart?

Bah, humbug! Your raps don't unnerve me; they're atrocious!

What frightens me the most is your gross ghost proboscis!

So enough with your pictures from the past! I'm not affected!

Well, you're about to be right now!

You're missing the point, Ebeneezy!

There's more to life than your work; take it easy!

Even I can make time for Azizy!

'Cause you don't know the spirit of Christmas!

If you did, then you would, at this moment, (aah!)

Be sharing your money with some of the homeless!

No! This isn't happening!

Harkening back to the dead Donald's lecture,

I still am expecting a final specter!

The Ghost of Christmas Yet to Come:

No one to love you and no one to cry!

Alone by yourself on the bed of your death

With the stench of regret on your last dying breath,

'Cause you've chosen the path of a selfish man

With Tiny Tim's innocent blood on your hands!

The penance you pay for the way you behave

Is written as plain as the name on this grave!

If I depart from my course, can they change? Say it is thus with what you show me!

I promise to mend my ways! A friend to all men is what I will become!

It's Christmas! I haven't missed my chance to be different! God bless us, every—

You got released on a bench, all pissed at the world!

Business and success, that's the path I selected,

I promise to change my ways. A friend to all men is what I will become! 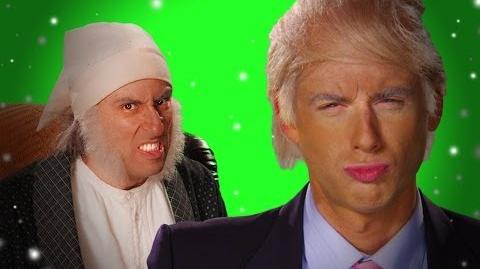 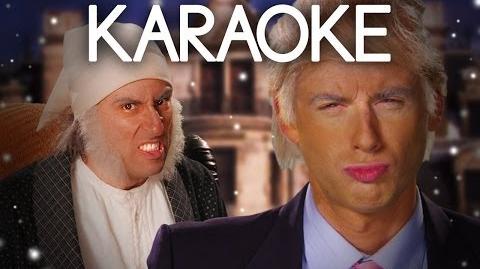 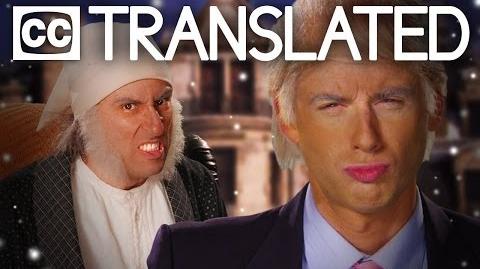 TRANSLATED Donald Trump vs Ebenezer Scrooge. Epic Rap Battles of History. CC
Add a photo to this gallery
Retrieved from "https://epicrapbattlesofhistory.fandom.com/wiki/Template:Trump_vs_Scrooge_colors?oldid=1014538"
Community content is available under CC-BY-SA unless otherwise noted.