Thanos is a fictional supervillain appearing in American comic books published by Marvel Comics. The character, created by writer/artist Jim Starlin and first appearing in The Invincible Iron Man #55, originally had his design inspired by the DC character Metron. However, editor Roy Thomas advised Jim Starlin that if he took inspiration from any New Gods character, it should be Darkseid, leading to his design being changed before his first appearance.

Born on the planet Titan, Thanos was almost killed by his own mother who foresaw his destiny of wielding the Infinity Gauntlet, which allows the Infinity Gems (Power, Mind, Space, Soul, Time, and Reality), to be used together to whatever end its user wills, effectively granting omnipotence. For Thanos, this was used to kill half the population of the universe in order to impress the female personification of Death, with whom he is obsessed.

Thanos appears prominently in the Marvel Cinematic Universe. Here, Death is omitted entirely and Thanos' motivation for killing half of all life is based on solving overpopulation and achieving universal "balance". The MCU version of Thanos quickly became one of the most iconic fictional villains in recent history; the signature scene associated with him occurs at the end of Infinity War, where he succeeds in his ultimate goal and causes the majority of the cast, including favorites such as Spider-Man, Black Panther, and most of the Guardians of the Galaxy, to disintegrate by snapping his fingers with the completed Infinity Gauntlet. He was portrayed by Josh Brolin in Guardians of the Galaxy, Avengers: Age of Ultron, Avengers: Infinity War, and Avengers: Endgame. Before this, he was briefly portrayed by Damion Poitier in a teaser scene at the end of The Avengers.

I am inevitable, immeasurable, inexorable, monstrous,

With bars weighing on you harder than your haunting guilty conscience!

I am Thanos, and I crush tracks like Tesseracts in my palm!

You're a pencil-pushing Terran who never learned to love his bomb!

Seems you started off a chemist, and on your world you were a prodigy.

Well, that makes sense, 'cause your rhymes are only hot periodically!

Man, I burned the Avengers down to embers, sent half your planet to be slaughtered,

And now I'm offing Oppenheimer like I did to my daughter!

Got a fist of gold when I'm rapping, six Infinity Gems what I'm packing!

Stick your tiny nuclear dick back into your pants, Dr. Manhattan!

Hadron smashing all your atoms, best not collide with me when I'm rhyming

'Cause you break and bleed so easy, I think I'll call you Oppen-hymen!

It's impossible to top me, Oppie, you just don't have the stones!

Apparently the only thing you're good at wrecking is a home,

Then got another married girl pregnant. You should've gone for the head.

For a communist pariah, you come off as awfully cocky.

But I'll make you bend the knee in round two like Nagasaki!

Got my name on this win like it's the Thanoscopter!

You just got no answer, for Fortnite's dopest dancer!

I will Loki choke you out like my name was throat cancer!

Thanos' name written on a board during "The Patreon Song" 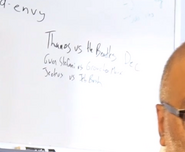 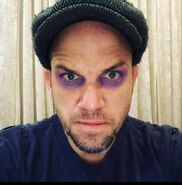 Retrieved from "https://epicrapbattlesofhistory.fandom.com/wiki/Thanos?oldid=1481155"
Community content is available under CC-BY-SA unless otherwise noted.