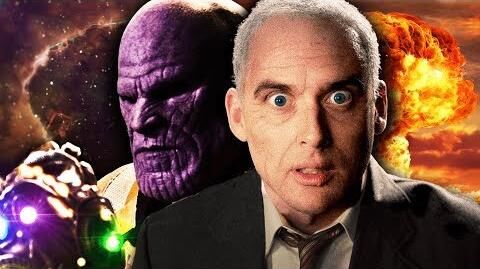 Thanos vs J. Robert Oppenheimer is the eightieth installment of Epic Rap Battles of History and the ninth episode of Season 6. It features Marvel Comics supervillain and interplanetary conqueror, Thanos, rapping against the Father of the Atomic Bomb, J. Robert Oppenheimer. It was released on December 18th, 2019.

I am inevitable, immeasurable, inexorable, monstrous,

With bars weighing on you harder than your haunting guilty conscience!

I am Thanos, and I crush tracks like Tesseracts in my palm!

You're a pencil-pushing Terran who never learned to love his bomb!

Seems you started off a chemist, and on your world you were a prodigy.

Well, that makes sense, 'cause your rhymes are only hot periodically!

Man, I burned the Avengers down to embers, sent half your planet to be slaughtered,

And now I'm offing Oppenheimer like I did to my daughter!

Got a fist of gold when I'm rapping, six Infinity Gems what I'm packing!

Stick your tiny nuclear dick back into your pants, Dr. Manhattan!

Hadron smashing all your atoms, best not collide with me when I'm rhyming

'Cause you break and bleed so easy, I think I'll call you Oppen-hymen!

It's impossible to top me, Oppie, you just don't have the stones!

Apparently the only thing you're good at wrecking is a home,

Then got another married girl pregnant. You should've gone for the head.

Listening to you took everything I have left.

After your raps, I am become deaf.

You need an Iron, Man, for that wrinkly-ass skin

Where's your rhythm? I thought you had the Time Stone.

But between us? Who's the worst MC? You!

Your dialogue's got too many breaks in the syllables.

You talk so slow, Drax thinks you're invisible.

I cause chain reactions when I'm lyrical

'Cause I've got that fissile material!

You were born to Eternals, but came out looking so scary

That your own mother tried to make you a Temporary.

Meanwhile, I've mastered the atom more than any man alive.

I'm a peaceful man, but I do what I must.

You had an evil plan, Thanos, and it left you in the dust!

It must leave you enraged, when you compare our talents:

Because in this battle, there is no balance!

For a communist pariah, you come off as awfully cocky.

But I'll make you bend the knee in round two like Nagasaki!

Got my name on this win like it's the Thanoscopter!

You just got no answer, for Fortnite's dopest dancer!

I will Loki choke you out like my name was throat cancer!

You wanna talk about Death? How about the one that looked at you and swiped left?

I'm the destroyer of worlds, you got your nuts handed to you by a Squirrel Girl!

I'll finish this like Ant-Man: all up in your stinky!

Anyone who believes that "Thanos did nothing wrong" crap

When you talk you can drop a trough between each syllable!

Thanos vs J Robert Oppenheimer. ERB Behind the Scenes