The Cat in the Hat

The Cat in the Hat assisted Dr. Seuss in his battle against William Shakespeare in Dr. Seuss vs Shakespeare. After Shakespeare's second verse, he brought out Things 1 & 2 to rap Seuss' second verse. He also made a cameo appearance in Nice Peter vs EpicLLOYD. A silhouette of him was also used in Michael Jordan vs Muhammad Ali. He was portrayed by Nice Peter on all occasions.

The Cat in the Hat danced next to Nice Peter during the line, "But I'm the one who had the brains to let a midget play the bad guys! Look at you!"

The Cat in the Hat appeared on a poster at the back of Michael Jordan's basketball court, imitating the NBA logo.

I would not, could not on a boat,

Read any of the boring-ass plays you wrote!

Even Horton doesn't want to hear you,

And Cindy Lou Who is afraid to go near you!

You bore people to death!

You leave a classroom looking like the end of Macbeth!

I entertain a child of any age!

You gotta translate what you said on the opposite page!

How you gonna battle with the Cat in the Hat?

Little kids get scared when I step on the mat!

Think your ruffled-neck ass gonna rap to that?

I got a best-selling book about me coming back! 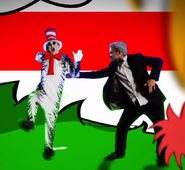 Dr. Seuss paints the Cat in the Hat
Community content is available under CC-BY-SA unless otherwise noted.
Advertisement