The Ghostbusters battled the Mythbusters and the Stay Puft Marshmallow Man in Ghostbusters vs Mythbusters. They are a team consisting of Peter Venkman, Egon Spengler, and Ray Stantz, who were later joined by Winston Zeddemore; they were portrayed by Chris Gorbos, Zach Sherwin, Mark Douglas, and Walter Downing, respectively.

The Ghostbusters are a fictional team founded by three misfit parapsychologists, Dr. Peter Venkman, Dr. Ray Stantz, and Dr. Egon Spengler, who investigate and capture ghosts for a living.

Originating from the 1984 movie Ghostbusters, the group establishes a paranormal extermination/investigations service known as "Ghostbusters" after losing their jobs at Columbia University and develops high-tech equipment capable of capturing ghosts. Along the way, they hire a fourth member, Winston Zeddemore, to assist them.

The Ghostbusters franchise has sparked the creation of a sequel to the first movie, Ghostbusters II, a remake of the original featuring an all female cast (also named Ghostbusters), as well as three animated television series based on it: The Real Ghostbusters, Slimer!, and Extreme Ghostbusters. The continuity of these cartoons purports to be the "real" version of the group and their universe, wherein the original films we know exist in–universe as Hollywood dramatizations.

[Note: Peter Venkman is in blue, Ray Stantz is in red, Egon Spengler is in green, Winston Zeddemore is in purple, Janine Melnitz is in regular text, and all members of the team rapping together is in italics.]

Are you tired of two geeks in mustaches

Who can manage to be boring with explosions and crashes?

If you, or the Lorax, wanna bust like we do,

Give us a call. We're ready to defeat you!

Get the people moving like the Statue of Liberty!

Try to beat us in a battle? Man, you gotta be kidding me!

The delivery of Stantz stands straight like my main man's Slinky!

I collect spores. Tell him 'bout the Twinkie.

That's enough from the walrus and dickless the clown.

Let's show these myth bitches how we do it downtown!

High speed shows your ass get beat in slow motion!

We roast show hosts when our flows cross streams!

Pumping out blockbusters, while you work behind the scenes!

It's a rap test, dummy, and you're both getting crashed!

We came, we saw, we kicked your ass!

That's enough from walrus and dickless the clown. 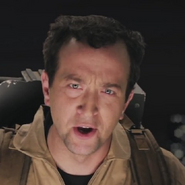 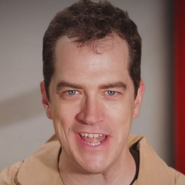 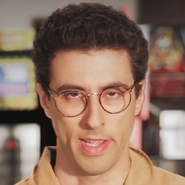 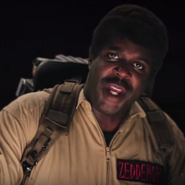 Start a Discussion Discussions about The Ghostbusters