The Great Hall is one of the key locations within the Red Keep, the castle held by the king of Westeros. It is also where the Iron Throne resides. A number of key events occur here, such as the arresting of Ned Stark after Robert Baratheon's death, or the murder of Aerys Targaryen, the father of Daenerys Targaryen, at the hands of Ser Jaime Lannister prior to the events of the novels.

This is where Nice Peter rapped starting from his third verse during the line, "Yo, don't try to paint me as some compulsive little jerk!" The background changed to black when Peter insulted the editors. 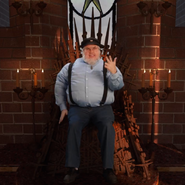