The Jackpot Golden Boys are a British rock duo that performed with Epic Rap Battles of History on their 2015 World Tour. The band consists of two brothers, Jim and Alex Molyneux. Some of their notable songs include "Caveman", "On the Rocks", and "Overachiever". Their website can be found here. As of September 28, 2016, they have become members of this wiki. Their account can be found here.

The Jackpot Golden Boys opened up concerts on the ERB tour with a brief performance. Later on, throughout ERB's performances, they ran around dressed as the Teenage Mutant Ninja Turtles and carried props, such as Abe Lincoln's eagle. 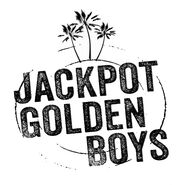 ERB and The Jackpot Golden Boys USA tour 2015
Add a photo to this gallery
Retrieved from "https://epicrapbattlesofhistory.fandom.com/wiki/The_Jackpot_Golden_Boys?oldid=1326655"
Community content is available under CC-BY-SA unless otherwise noted.