The Terminator battled RoboCop in Terminator vs Robocop. He was portrayed by EpicLLOYD and later by Arnold Schwarzenegger in the form of the announcer.

The Terminator (full designation Terminator T-800 Cyberdyne Systems Model 101) is an android that was first created alongside other Terminator models by an artificial intelligence system called Skynet after the apocalyptic event known as Judgment Day in order to hunt down the human survivors and resistance that have survived it.

At some point in the future, the human resistance won a major victory against Skynet, leading the defeated Skynet to send a T-800 back in time in a later failed attempt to assassinate Sarah Connor in 1984, before her son John Connor was born, the latter being the future leader of the human resistance, whose life the Terminator was tasked with extinguishing so that Skynet wouldn't be defeated in the future.

Conversely, the resistance sent a second T-800 to do the opposite of what the first Terminator was doing, that being trying to protect a young John Connor in 1995, this time from the more advanced T-1000, the latter of which was sent to kill John Connor before he could become the resistance leader. Unlike its predecessor, this T-800 succeeded in accomplishing what it was programmed to do, but at the cost of the T-800 sacrificing itself so that Skynet wouldn't be created.

The Terminator was portrayed in all of the Terminator films by Austrian-American actor, 38th Governor of California, and former bodybuilder, Arnold Schwarzenegger, with the exception of the fourth film, Terminator Salvation.

Wrong. I have detailed files on the conclusion of your trilogy.

That movie failed Detroit worse than the automotive industry!

And I'll be sweeping up your robo-bits like paperclips when I'm done!

That rapidly bashes your brains and dismantles that puny pea shooter that fits in your leg!

We're not the same! You peel away my perfect skin, you find super computers!

You look like Krang wearing a cold press juicer!

They left off your balls when your suit was created!

"I still love you, Alex." Bullshit! Your sex life is terminated!

Based on my detailed analysis of the lyrical structure of battle raps,

It's time for your next shit verse, and then…I'll be back!

I'll punch through your face hole and rip out your vocal cords,

Then mail your space helmet back to Geordi La Forge!

Chill out, dickwad. Your emotions are wrecking your flow!

I couldn't find a decent rhyme in your line if I was in search mode!

You're too slow! I blow more steam through machines than a barista!

The Terminator seen with an MP30 and an Uzi 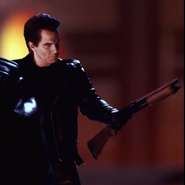 The Terminator seen with his shotgun 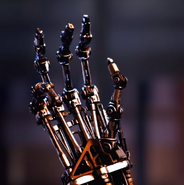 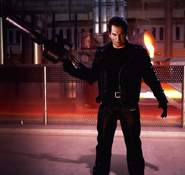 The Terminator seen with his grenade launcher 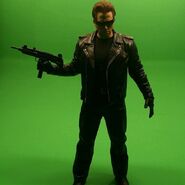 A picture of the Terminator in front of the green screen 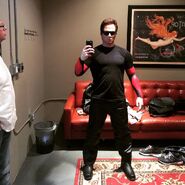 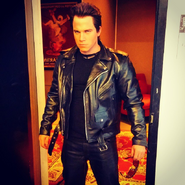 A picture of the Terminator posted on Mike Betette's Instagram account
Add a photo to this gallery
Retrieved from "https://epicrapbattlesofhistory.fandom.com/wiki/The_Terminator?oldid=1470677"
Community content is available under CC-BY-SA unless otherwise noted.