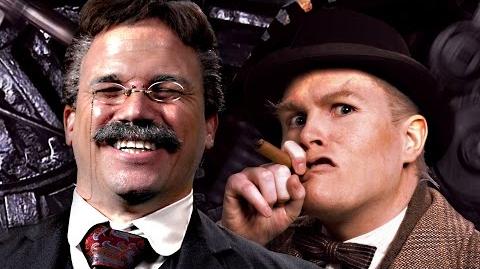 Bully! A challenge! I love competition!

Now, where would I mount the stuffed head of a Winston?

(Ha!) I'm into fitness, digging ditches through an isthmus,

Rough riding down to Cuba like, "What's up, bitches?!"

I keep my rhymes pure like my food and drugs!

I'm an American stud, and you're the British Elmer Fudd!

I mean, for Christ's sake, look at that mug!

At least grow a spruce mustache and cover part of it up!

And let's face it, you're not all that great!

You tossed away lives in Gallipoli like they were scraps off your plate!

Your whole miserable country is the size of one state!

I could see my way through running that without donning my pince-nez!

Don't go toe to toe with me, you bloated, drunk, old man!

Why don't you do-si-do on over to a twelve-step program?

I'll bust a trust fund lush with my American muscles,

So walk softly over here and give my big stick a suckles!

Pass me a cigar and a large glass of brandy.

I'm about to take you out prematurely like your family!

I'm the Rhyme Minister, fresh in a hat and dinner jacket!

You look like a mix of EpicLLOYD and a Pringles packet!

(Ha!) I was saving the planet from an axis of darkness

While you were back home opening national parks, yes!

You were born asthmatic; you're going to choke hard,

While I wake up every day and chain smoke cigars!

Any way you want to fight, I'll fight ya, and I'll beat ya, see?

I might be battling you even though I'm toasted,

But tomorrow, I'll be sober, and you'll still be roasted!

My parents died when they were young, and it was morbid,

But at least they didn't ditch me while they were alive like yours did!

Well, Teddy's dropping bombs, so you best go hide in your tube!

(Ooh!) You should be ashamed of your military honor!

Everyone knows you're back at home like, "Thank God for Pearl Harbor!"

Don't worry, the US will give you a pass!

Just change your poster to "Keep calm and kiss my cousin's ass!"

Steady there! I don't think it's very fair

For a British Bulldog to melee with a Teddy Bear!

(Ha!) You're no man; you're an overgrown Boy Scout!

I should stuff you in a pram just so you can throw your toys out!

They put your fat head on a mountain to save face,

But if Rushmore was a band, then you'd play bass!

Look at Roosevelt! The dude's about to lose the bout to Churchill!

If a bullet to the chest won't stop you, my words will!

TR will give WC the full deuce!

Whatever shit you throw at me, I'll just return to sender!

I'll battle to the end, and I will never surrender!

Throw the full weight of my wit against your Bull Moose bullshit! 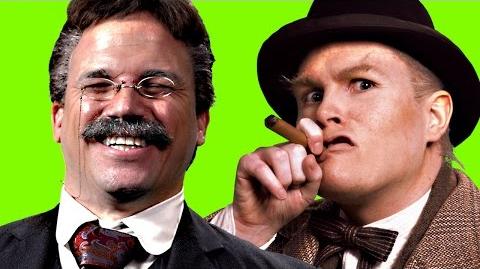 Theodore Roosevelt vs Winston Churchill. ERB Behind the Scenes