Thomas Alva Edison was born on February 11th, 1847, in Milan, Ohio. He was an American inventor and businessman who developed and distributed many devices that greatly influenced and advanced life around the world: phonographs, the motion picture camera, and the electric light bulb.

Dubbed "The Wizard of Menlo Park", Edison was one of the first inventors to apply the principles of mass production and large-scale teamwork to the process of invention. Because of that, he is often credited with the creation of the first industrial research laboratory. Edison is one of the most prolific inventors in history, holding 1,093 U.S. patents in his name, as well as many patents in the United Kingdom, France, and Germany. He is credited with numerous inventions that contributed to mass communication and, in particular, telecommunications. These included a stock ticker, a mechanical vote recorder, a battery for an electric car, electrical power, recorded music, and motion pictures.

I don't alternate my flow; I diss you, directly!

I conduct business; understood things you never could!

And I'll bet you fifty thousand dollars that you'll never forget it!

Without me, here's a taste of what this battle will be: 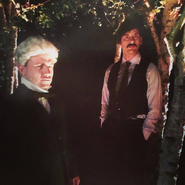 Thomas Edison (portrayed by EpicLLOYD), alongside Nikola Tesla (portrayed by Nice Peter), at a party held by Elon Musk
Community content is available under CC-BY-SA unless otherwise noted.
Advertisement