Thomas Jefferson was born on April 13th, 1743, in Shadwell, Virginia. He was an American Founding Father and the principal author of the Declaration of Independence. He served as the nation's first Secretary of State from 1790–1793, the second Vice President from 1797–1801, and the third President from 1801–1809. Jefferson was an advocate of democracy, republicanism, and individual rights, which motivated American colonists to break from Great Britain and form a new nation. He produced formative documents and decisions at both the state and national level. He died at the age of 83 on July 4th, 1826, at his primary residence of Monticello, in Charlottesville, Virginia. Jefferson notably died on the same day as the second President of the United States, John Adams, who Jefferson served under as Vice President.

Jefferson, alongside George Washington and Abe Lincoln, briefly appeared when Winston Churchill said, "But if Rushmore was a band, then you'd play bass!", playing drums in their fictional band.

When in the course of human events,

It becomes necessary for a battle to commence,

Then kplow! I hit 'em with the illness of my quill!

Let me run down my résumé, will ya?

I told King George he could eat a fat dick!

When it comes to declarations, I'm the first draft pick!

I'll topple any tyrant, so kings and pirates beware!

I'm so down with revolutions, I invented the swivel chair!

But I've yet to read the three books you wrote about YOU!

Didn't come back from Paris to battle Pepé Le Pew!

Not to mention third President; the fuck'd you do?

Alright, I admit it. I confess!

I participated in a broken system that I hated,

But I needed to keep my financial status situated!

And the words I used were "hideous blot"

To describe the slave trade and the pain it hath brought!

When I ran the whole state and still made it home for dinner! 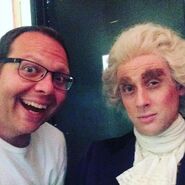 A Behind the Scenes look at Dante Cimadamore as the body actor for both Jefferson and George Washington
Community content is available under CC-BY-SA unless otherwise noted.
Advertisement