Thor's Viking ship is where Thor rapped during his second verse in Zeus vs Thor. It is also where the Vikings made their cameo appearance.

Thor's Viking ship is a vessel similar to the ones used and built by the Vikings during the Viking Age. The type of ship often varied, depending on what it was intended for. They were generally characterized as being slender and flexible boats, with symmetrical ends with true keel. They were clinker built, which is the overlapping of planks riveted together. Some ships might have had a dragon's head or other circular object protruding from the bow and stern, for design, although this is only inferred from historical sources.

Viking ships were an important part of Viking society, as they permitted them to embark on their voyages of trading, raiding, and exploration. They ranged in the Baltic Sea and far from the Scandinavian homelands, to Iceland, the Faroe Islands, Greenland, Newfoundland, the Mediterranean, the Black Sea, and Africa.

Constructed from Lego bricks, this is where Thor rapped during his second verse after Zeus knocked him down from Asgard with his lightning bolts. Multiple Vikings also appeared on the ship at certain points. 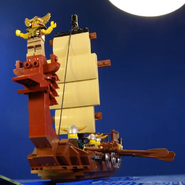 A Behind the Scenes look at Thor's Viking ship

Another sketch from the Zeus vs Thor storyboard of Thor and the Vikings on his ship
Add a photo to this gallery
Retrieved from "https://epicrapbattlesofhistory.fandom.com/wiki/Thor%27s_Viking_Ship?oldid=1325214"
Community content is available under CC-BY-SA unless otherwise noted.