This article is about the cinematographer. For the Norse god, see Thor.

Thor Wixom was born on March 29th, 1972, in Provo, Utah. He is a producer, director, cinematographer, steadicam operator, and editor. He is also notable for his work on a variety of films, such as The Freemason, April Rain, Killer Holiday, and Resolution. His website can be found here. 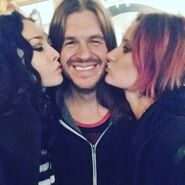 Wixom's Facebook avatar
Add a photo to this gallery
Retrieved from "https://epicrapbattlesofhistory.fandom.com/wiki/Thor_Wixom?oldid=1391275"
Community content is available under CC-BY-SA unless otherwise noted.