Epic Rap Battles of History Wiki
Register
Don't have an account?
Sign In
Advertisement
in: Actors, Behind the Scenes, Season 4,
and 2 more

Tony Clark portrayed a police officer and assisted as a magic consultant and stunt coordinator during the production of David Copperfield vs Harry Houdini.

Antonio Gublet, better known as Tony Clark, was born on March 15th, 1966, in Stamford, Connecticut. He is a magician and magic consultant. By the age of eighteen, he had already gained national notoriety for his many accomplishments as a young magician, in which he went on to receive awards such as World Class Stage Champion in 1988, Best Young Magician in 1995, and Best Classical Magic Act in 2000. He was even nominated for Stage Magician of the Year by the Magic Castle in 1994. In 1996, Clark produced and starred in his own full magic show, Phantasy. He has also consulted on several high-grossing television shows, including House, Monk, and Brothers & Sisters. His website can be found here. 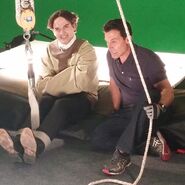 Clark gripping the supporting rope attached to Lloyd as Houdini

Another shot of Clark supporting Lloyd as Houdini
Community content is available under CC-BY-SA unless otherwise noted.
Advertisement