Anthony Frank "Tony" Hawk, also known by his nickname "The Birdman", was born on May 12th, 1968, in Carlsbad, California. He is a professional skateboarder, actor, and owner of the skateboard company Birdhouse. Hawk is well-known for completing the first documented 900 and for his licensed video game titles, published by Activision. He is widely considered to be one of the most successful and influential pioneers of modern vertical skateboarding. He is also well-known for his involvement in various television shows and video games, such as Fameless and the Pro Skater franchise.

I can skate better than this church boy turd can!

Not Cash Money, it's just Wayne versus Birdman!

You got your whole league to protect and adore you,

So which goon's gonna take this battle for you?

(Ooh!) I'm the dude who blew up extreme sports!

That nose looks like you've seen some extreme snorts!

I mean, look at that thing! That slope is gigantic!

Even I wouldn't fly off a ramp that titanic!

And all the ice underneath you will get melted into water

When I hit you with a trick that's even hotter than your daughter!

You're old and you're basic; your talent is faded!

And Oiler alert: you're about to get traded!

I drop rhymes like I'm dropping into a half-pipe!

I'll thrash this asswipe, hit you like a hash pipe!

(Uh!) Keep your mittens on, Gretzky; you're too clean!

Great One, Wayne! Let me say something, Wayne!

You'll catch a pop shove-it to the mullet if you tempt me!

Your threats are like my swimming pools, bruh: empty!

Man, you should hit the buzzer 'cause it's time to change lines!

You put that joke in the top shelf of lame rhymes!

This ain't typical sports; I use centripetal force

While you prance around in 4-pound icy diaper shorts!

I try to watch you on TV, but I can't see the puck!

Hockey used to have guts, but now the teams Mighty Suck!

I taught kids around the world that there's nothing they can't do!

Put more souls into skating than some Vans shoes!

You're a pro on the ice, but a rookie when rappin'!

Now I see why the Rangers demoted this captain! 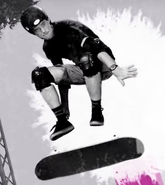 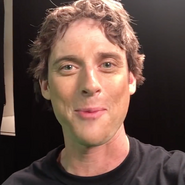 Nice Peter's wig as Hawk, which is worn under his helmet
Add a photo to this gallery
Retrieved from "https://epicrapbattlesofhistory.fandom.com/wiki/Tony_Hawk?oldid=1452081"
Community content is available under CC-BY-SA unless otherwise noted.