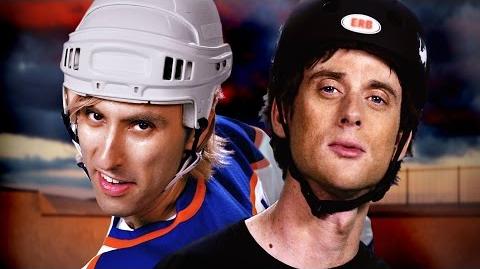 Tony Hawk vs Wayne Gretzky is the sixty-eighth installment of Epic Rap Battles of History and the tenth episode of Season 5. It features professional skateboarder, Tony Hawk, rapping against former NHL superstar, Wayne Gretzky. It was released on December 12th, 2016.

[Note: Tony Hawk is in brown, Wayne Gretzky is in blue, and Bobby Orr is in gold.]

I can skate better than this church boy turd can!

Not Cash Money, it's just Wayne versus Birdman!

You got your whole league to protect and adore you,

So which goon's gonna take this battle for you?

(Ooh!) I'm the dude who blew up extreme sports!

That nose looks like you've seen some extreme snorts!

I mean, look at that thing! That slope is gigantic!

Even I wouldn't fly off a ramp that titanic!

And all the ice underneath you will get melted into water

When I hit you with a trick that's even hotter than your daughter!

You're old and you're basic; your talent is faded!

And Oiler alert: you're about to get traded!

I drop rhymes like I'm dropping into a half-pipe!

I'll thrash this asswipe, hit you like a hash pipe!

(Uh!) Keep your mittens on, Gretzky; you're too clean!

That verse was rough! Damn, Tony!

So let me smooth it out like I'm a damn Zamboni!

(Eyy!) I'm the greatest ever when I play hockey,

But on the microphone, I don't play, Hawkey!

It's a street fight, T. Hawk! Show some respect!

If you don't, then you'll catch a slap shot to the deck!

And I take a Flyer down, Bird; you're getting wrecked,

So you best prepare for arrival and cross-check!

(Hey!) Let me tell you what putting a puck in the net's worth:

Double what you've banked in bucks! Check my net worth,

And my hot wife, the only woman in the world for Wayne!

You're on your fourth wife; talk about the X Games!

There was one big trick that you ever did,

Oh, you like fingerflips? How about one of these?

Sit on this and rotate 900 degrees!

Great One, Wayne! Let me say something, Wayne!

You'll catch a pop shove-it to the mullet if you tempt me!

Your threats are like my swimming pools, bruh: empty!

Let's skip the kickflips and McTwists!

This goofy-footed geek's straight getting smoked!

Got you down on your knee pads! Sorry about the deke joke!

Man, you should hit the buzzer 'cause it's time to change lines!

You put that joke in the top shelf of lame rhymes!

This ain't typical sports; I use centripetal force

While you prance around in 4-pound icy diaper shorts!

I try to watch you on TV, but I can't see the puck!

Hockey used to have guts, but now the teams Mighty Suck!

I taught kids around the world that there's nothing they can't do!

Put more souls into skating than some Vans shoes!

You and I have so many world records between us!

For true sports fans, this was finished as soon as they heard the matchup!

You're a pro on the ice, but a rookie when rappin'!

Now I see why the Rangers demoted this captain!

Hold up, let me check the stat book,

You just missed 100% of the shots that you took!

I don't care if this bird gets the biggest air around

I'm a champion when it comes to putting Flyers underground!

You became a sellout in your retirement years!

Got milk, Hawk? I've got 4 cups for you right here!

Guess what putting a puck in the net's worth:

Double what you stack up in bucks, check my net worth!

Double the girth of your purse, check my net worth!

Oh, you like fingerflips? Then try one of these! 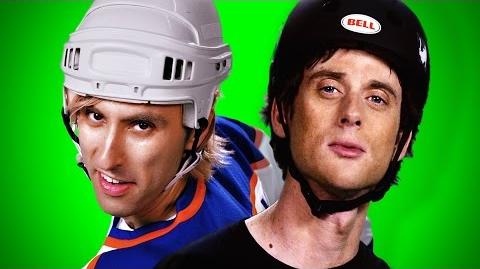 Tony Hawk vs Wayne Gretzky - ERB Behind the Scenes 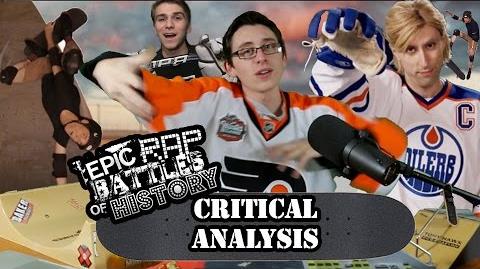 Retrieved from "https://epicrapbattlesofhistory.fandom.com/wiki/Tony_Hawk_vs_Wayne_Gretzky?oldid=1491340"
Community content is available under CC-BY-SA unless otherwise noted.