Trent Turner worked as a grip for Frank Sinatra vs Freddie Mercury and Barack Obama vs Mitt Romney. He was subsequently a production assistant for nine battles: from Bruce Lee vs Clint Eastwood to Rasputin vs Stalin, followed by a gaffer for four battles: from Shaka Zulu vs Julius Caesar to Elon Musk vs Mark Zuckerberg.

Trent Thomas Turner was born in Waverly, Illinois. He is a freelance director, cinematographer, and former member of the Epic Rap Battles of History crew. He is also known for his work on various Smosh videos, the web series Baby Doll Records, and the films Deadly Daycare, Tales of Halloween, and The Capture. 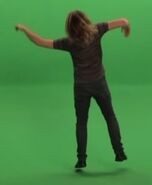 Trent Turner in the Behind the Scenes video for Rasputin vs Stalin
Add a photo to this gallery
Retrieved from "https://epicrapbattlesofhistory.fandom.com/wiki/Trent_Turner?oldid=1471748"
Community content is available under CC-BY-SA unless otherwise noted.