The USS Enterprise is where Spock made one of his cameo appearances in Christopher Columbus vs Captain Kirk.

The Starship Enterprise, otherwise known as the Enterprise or USS Enterprise (United Federation of Planets designation NCC-1701), is the name of several fictional spacecrafts, some of which are predominant settings of the main crew in the Star Trek universe.

The very first craft christened Enterprise was a Warp-5-capable prototype built in the 22nd century and flown under the command of Jonathan Archer, designated NX-01. Future versions were given the designation NCC-1701, with the first two vessels commanded by James T. Kirk in the 23rd century, the third one by John Harriman in the late 23rd century, the fourth one by Rachel Garrett in the early 24th century, and the last two by Jean-Luc Picard in the 24th century as well.

Star Trek creator Gene Roddenberry took the name "Enterprise" from several vehicles in US military service, notably warships and aircraft carriers of his day. The first US Space Shuttle was also named Enterprise by fans of the show in 1976, which was later retconned into Star Trek canon as the basis for the name.

The original USS Enterprise, along with Spock, appeared briefly when Captain Kirk said the line, "Mr. Spock, beam me back to 1492 so I can beat this man like it's my…job. We'll see how Isabella likes my…captain's log." 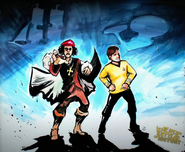 The USS Enterprise appearing above Kirk in the drawing, along with the Santa María
Add a photo to this gallery

Retrieved from "https://epicrapbattlesofhistory.fandom.com/wiki/USS_Enterprise?oldid=1450272"
Community content is available under CC-BY-SA unless otherwise noted.