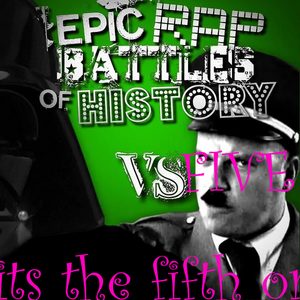 In this Season 6 installment of Epic Rap Battles of History, the fantastic, titillating saga of Darth Vader vs Adolf Hitler continues where the last one left off.

*Darth Vader and Peter Griffin are seen in the school bathroom listening to soundcloud.*

Sure, but my mom said if I ask for more after this I’m grounded.

That sucks, dude. Want my Uncrustable? I’m not hungry.

*The stall behind them begins vigorously shaking, smoke emitting from within.*

*Vader picks his nose under his mask.*

*The door flies off the stall, killing Peter instantly and eating his flesh. A figure emerges from the stall, carrying groceries.*

I am Adolf Hitler! Connoisseur of crack!

Little known fact: I am not actually black! WHAT?

You are Vader, with those well-toned thighs,

Why, I fall in love again when I look into your eyes!

I live in the school’s sewer, and I heard you need silly bands, no?

So I brought you some! PSYCH! These are all my own!

Why would I share with you, Vader? You’re a one-night stand!

I had more fun ballin’ with Stalin in his crummy old van!

I came here to tell you I will assassinate you and John F. Kennedy!

We are no longer lovers for life, but lifelong enemies!

So prepare to be choked, like my cock while I’m crying!

You hear that? (What?) *Hitler farts.* It sounded like your people dying!

You can't even suck your own dick, why even bother?

So many dudes slept with your mom, but I'm the one who fucked your father!

Fifth battle up to bat now, bow down before the smack down,

I laugh at your butt because it is an ass, clown!

I’ll kick in your shins in, you stilts-wearing-midgets!

And break every inch in all twelve of your digits!

This is my last stand against you! After this, I will surely sit!

You will be gored until I paint the floorboards with every single orifice!

Don’t hurt Kennedy, that hunky man is my best friend!

We were going to do sex and watch Garfield cartoons at Ten!

I will no longer trust you, you lied about being black, you hack!

Now I will smack your back with a bat til your back starts to crack!

*Xi Jinpeng trips out of a bathroom stall behind them, hearing the chaos.*

Hold it, you two! I will not stand this battle at all!

I’m going to bully you so hard, I might even push you up against the wall!

I was just trying to piss in this bathroom, but now I need to shit!

Down your throats, that is! I’m gonna poop you two to bits!

*John F. Kennedy emerges from the handicapped stall and pisses onto Xi, chasing him out the window. An audience begins to cheer in praise as Kennedy waves to Vader, still peeing on the floor.*

John F. Kennedy: Fuck you, Xi, I will not eat my second son!

And I will not die either, Hitler! For it’s you that is done!

I am immortal and timeless, I always even the score,

Because I am John F. Kennedy; hear me roar!

I’m the Beyonce to your Solange, the grassiest of Knowles,

Watch my bold coldness unfold! I’ll punt this cunt back down the bowl!

Hey Hitler, mister! I’ll hit ya til you’re like my sister!

And tell your sexy lady friend that I’m a mean fister!

I will game on your girls, and fuck your brothers for sure!

*Julius Caesar drops in from the vents, and makes Kennedy lock himself back up in the handicapped stall.*

Enter I doth, to quench mine thirst for the fluid of the girls whom game!

Please explain, where mighteth I find such a dandy o’ dames?

For, the nectars I do desire! Merhapsn’t my quench answered?

If I don’tn’tn’t get the fluids, might my health be badly tampered?

Thou must help me, Hitler, for a sewer dweller thou not isn’t, but is!

Tis’ you whom’d give me a hopeth of a madame’s whizz?

Dude, what the fuck is wrong with you? Why would you drink some fucking girl’s pee?

Did your parents not respect you, Caesar? Grow some fucking decency!

I have come to purge this degenerate world of you lowly infections,

Pissing on the floor and walking through sewage without protection,

Hitler, you sleaze; you're carrying groceries through feces!

Some man got killed by your stall door, now Caesar's thirsty for pee pee!

You're all driving me crazy with your raw, disgusting shenanigans,

I- oh god, oh fuck, why is my stomach bursting? What's happening?

*Abe Lincoln bursts out of Lenin, ready to kill everyone. Caesar crabwalks into a stall, causing a girl to scream.*

I ended racism myself back in nineteen-forty-two,

And like the Garbage Pail Kids, fuckers, I’m here to kill you!

I heard violence in the bathroom, so I came in to stop it!

I’ll smack you up so badly, you’ll become a black cyborg Bop-It!

But I am! I hate women and minorities by far!

In fact, I was going to fly to Honduras and commit war crimes!

Because I am a horrible human being! Don’t tell New York Times!

I bet you won’t guess them! It’s not like it was Uzbekistan, you dumb thing!

I’ve worked with the CIA in South America! I’m the government’s tool!

I killed Chavez with my bare hands, then ate his body in my pool!

*Someone else enters the bathroom by climbing in the window.*

My name is Joey from Friends, dressed as Justin Trudeau.

I will douse your fucking house in maple syrup and burn it!

No CIA tool will fool me into a pool with him again!

Lincoln’s a psychopath! He tried to drown me and my friend Ben!

So I have come to kill him! This needle is filled with Ketamene!

I will stick it into his neck while he sleeps and douse him in kerosene!

And then, he will die! Fuck you! My plan is flawless!

I wrote it down on a used napkin, so I know I can follow it!

I will smack you stupid until you’re covered in my smeg!

One second, I need to shit… wait… is that an… egg?

*Joey from Friends, dressed as Justin Trudeau lays an egg. Out hatches…*

I AM THE ULTIMATE LIFEFORM! You’re gonna have a bad time, it’s inevitable!

The imminent release of death is like sex with me; it’s incredible!

I will destroy dick December on your corpses most ludicrously,

Call me Lubricant, because I’m slicker than a piss stain in this laboratory!

I didn’t stretch a rhyme, but I’ll stretch your spine!

When I snap your back over my knees seven-hundred fucking times!

I cast see-through magic upon my foes, I am of the upmost of clerical!

Shut up, whores! I will nuke the whole planet with my seven-inch cocks!

My dicks are so fucking hard right now, they can break Minecraft rocks!

By the way, Vader, mom said it’s my turn on the X-Box.

*THANOSans stabs Vader repeatedly in the chest, but Hitler stops THANOSans and eats his hand, killing him. Vader looks at Hitler and cries.*

Hitler… I should have died! Why did you save me?

Because I’m having a father, and… you’re the baby!

Retrieved from "https://epicrapbattlesofhistory.fandom.com/wiki/User_blog:Awesomesix/Vader_vs_Hitler_5._Epic_Rap_Battles_of_History_Season_6?oldid=1468419"
Community content is available under CC-BY-SA unless otherwise noted.