Vinny Squiggliani is a character created and played by EpicLLOYD at the end of Dis Raps For Hire - Season 2 Episode 1: Glasscock in a comedic advertisement for the Dis Raps For Hire Season 1 CD, alongside Mike Betette. He helps advertise the CD to a random passerby when it is speculated he is selling new and used cars, later forcing the citizen to endorse the product. He also states that the first 100 copies of the CD will be signed by Lloyd himself. According to a Facebook post by Lloyd, he could be returning for some more news in the near future.[1] 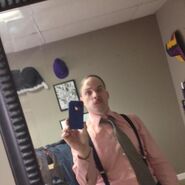 Retrieved from "https://epicrapbattlesofhistory.fandom.com/wiki/Vinny_Squiggliani?oldid=1221826"
Community content is available under CC-BY-SA unless otherwise noted.