Vlad III, better known as Vlad the Impaler (Romanian: Vlad Țepeș) or Dracula, was born in 1431 in Sighișoara, Romania. He was voivode, or prince, of Wallachia three times between 1448 and his death. Vlad is known for the exceedingly cruel punishments he imposed during his reign as recorded in later chronicles. His reputation for brutality, as well as his patronymic, also inspired the name of the vampire Count Dracula in Bram Stoker's 1897 novel Dracula. He was presumably killed in battle against a large Turkish army in December 1476 in Bucharest, Romania. His decapitated head was then sent to Constantinople in January 1477, where the sultan had it displayed on a stake as proof of Vlad's death.

Imagine forests of corpses, dripping on a buffet,

Vlad Dracula, spawn of the devil!

Dipping my bread in your weeping blood vessels!

Scorched the Earth from Hungary to Wallachia!

Stepped to the Turks and the bodies started dropping!

Put my foot on Ottomans like I was furniture shopping!

I save my stakes, no need crucifix:

I kill you with Olive Garden garlic breadsticks!

Did you shapeshift those punchlines? 'Cause they mist!

I'll turn your taint to a 'tis, when I put a stick through ya!

Haven't seen a sucker this soft, since Bunnicula!

Get beat by Count Dracula? You're smoking crack-ula!

I dunk on your whack-ula raps like I'm Shaq-ula! (Ohhhhh!)

I'm Vlad to the bone, Vlad the hat-nailer,

Vlad the commits heinous acts on rats, ask the jailer!

You leeched my name, you pale son of a bitch!

And your weak ass gets beat by the sun at the beach!

Your slick hair and cape are all flappy razzle-dazzle,

But at end of day, you're a bat and that's only half a battle!

You 8-bit my whole style and get whipped like Castlevania.

Everybody plays you, even cuckoo Sandler do you.

Speaking of bite, your rhymes are bloody awful. 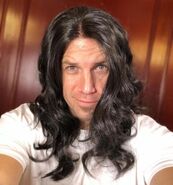 A blue demo version of Vlad's background
Add a photo to this gallery
Retrieved from "https://epicrapbattlesofhistory.fandom.com/wiki/Vlad_the_Impaler?oldid=1469332"
Community content is available under CC-BY-SA unless otherwise noted.