Vlad the Impaler vs Count Dracula 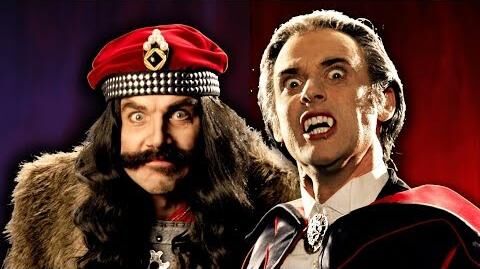 EpicLLOYD as Vlad the Impaler

[Note: Vlad the Impaler is in dark red, Count Dracula is in gray, and R. M. Renfield is in light blue.]

Imagine forests of corpses, dripping on a buffet,

Vlad Dracula, spawn of the devil!

Dipping my bread in your weeping blood vessels!

Scorched the Earth from Hungary to Wallachia!

Stepped to the Turks and the bodies started dropping!

Put my foot on Ottomans like I was furniture shopping!

I save my stakes, no need crucifix:

I kill you with Olive Garden garlic breadsticks!

Does this mic still work after that blah, blah, blah?

The flex of a rear-spearing princeling can't vex me

'Cause I nibble necks and I make it look sexy!

I shapeshift into mist and bone Winona Ryder!

While you've got less taste than an Anne Rice cake!

Your rhymes are empty, like I leave vascular systems!

I'd grant you the privilege of being Dracula's victim,

But the thought of biting you makes me get nauseous!

You don't look like the type that's keen on neck washes!

Did you shapeshift those punchlines? 'Cause they mist!

I'll turn your taint to a 'tis, when I put a stick through ya!

Haven't seen a sucker this soft, since Bunnicula!

Get beat by Count Dracula? You're smoking crack-ula!

I dunk on your whack-ula raps like I'm Shaq-ula! (Ohhhhh!)

I'm Vlad to the bone, Vlad the hat-nailer,

Vlad the commits heinous acts on rats, ask the jailer!

You leeched my name, you pale son of a bitch!

And your weak ass gets beat by the sun at the beach!

Your slick hair and cape are all flappy razzle-dazzle,

But at end of day, you're a bat and that's only half a battle!

Wow! I did not know that you could read!

Ha! You thought the sun could kill me? Not true!

I'm the vampire so cold they call me Nosfer-achoo!

My syllable delivery is devilishly intricate!

I rock the house, once I'm invited into it!

And here's a tidbit that you can stick a stake up:

You're losing so bad you should join Team Jacob!

'Cause Vlad the Impaler has just been skewered!

You 8-bit my whole style and get whipped like Castlevania.

Everybody plays you, even cuckoo Sandler do you.

Speaking of bite, your rhymes are bloody awful.

Vlad the Impaler vs Count Dracula - ERB Behind the Scenes