Vladimir Lenin battled Rasputin and Joseph Stalin preceding Mikhail Gorbachev, and Vladimir Putin in Rasputin vs Stalin. He also made a cameo appearance through reused footage in Alexander the Great vs Ivan the Terrible. He was portrayed by Nice Peter on both occasions.

Vladimir Ilyich Ulyanov (Russian: Владимир Ильич Ульянов) and later renamed to Vladimir Ilyich Lenin (Russian: Владимир Ильич Ленин), was born on April 22nd, 1870. He was a Russian communist revolutionary, politician, and political theorist who served as the leader of the Russian SFSR from 1917, and then concurrently as Premier of the Soviet Union from 1922 until his death in 1924. Politically a Marxist, his theoretical contributions to Marxism are known as Leninism, which, coupled with Marxist economic theory, have collectively come to be known as Marxism–Leninism.

After the departure of the tsar, Lenin's Bolshevik faction of the Russian Social Democratic Labour Party took a senior role in orchestrating the October Revolution in 1917, which led to the overthrow of the Russian Provisional Government and the establishment of the Russian Soviet Federative Socialist Republic, the world's first constitutionally socialist state. Immediately afterwards, Lenin proceeded to implement socialist reforms, including the transfer of estates and crown lands to workers' soviets. Faced with the threat of German invasion, he argued that Russia should immediately sign a peace treaty, which led to Russia's exit from the First World War. In 1921, Lenin proposed the New Economic Policy, a system of state capitalism that started the process of industrialization and recovery from the Russian Civil War. In 1922, the Russian SFSR joined former territories of the Russian Empire in becoming the Soviet Union, with Lenin as its leader. The Bolshevik faction later became the Communist Party of the Soviet Union, which acted as a vanguard party presiding over a single-party dictatorship of the proletariat. He died on January 21st, 1924.

Lenin, alongside Mikhail Baryshnikov, Rasputin, Mikhail Gorbachev, Vladimir Putin, and Joseph Stalin, appeared in the Red Square during the line in Ivan the Terrible's first verse, "I'm the first Tsar of all of Russia!"

I have no pride for you who ruined everything

My revolution was doing to stop the bourgeoisie!

I fought the bondage of classes! The proletariat masses

Have brought me here to spit a thesis against both of your asses!

Let me start with you there, Frankenstein!

It's hip-hop chowder, red over white,

'Cause the Tsar's wife can't do shit tonight!

And Joseph, you were supposed to be my right-hand man,

But your loyalty shriveled up like your right hand, man!

Our whole future was bright! You let your heart grow dark,

And stopped the greatest revolution since the birth of Marx!

You used to be my right hand man

Till your loyalty shriveled up like your right hand, man 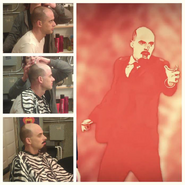 A collage of Nice Peter turning into Lenin posted on ERB's Facebook page
Community content is available under CC-BY-SA unless otherwise noted.
Advertisement