Vladimir Putin battled Rasputin, Joseph Stalin, Vladimir Lenin, and Mikhail Gorbachev in Rasputin vs Stalin. He also made a cameo appearance through reused footage in Alexander the Great vs Ivan the Terrible, as well as another brief speaking appearance in an ERB News video. He was portrayed or voiced by Nice Peter on all three occasions. A shirtless picture of Putin also made a cameo appearance in Donald Trump vs Joe Biden in the Russian computer room.

Vladimir Vladimirovich Putin (Russian: Владимир Владимирович Путин), born on October 7, 1952, has been the President of Russia since May 7, 2012. He previously served as President from 2000 to 2008, and as Prime Minister of Russia from 1999 to 2000 and again from 2008 to 2012. He was also previously the Chairman of United Russia political party.

For sixteen years, Putin was an officer in the KGB, rising to the rank of Lieutenant Colonel, before he retired to enter politics in his native Saint Petersburg in 1991. He moved to Moscow in 1996 and joined President Boris Yeltsin's administration, eventually becoming President on December 31st, 1999 following Yeltzin's resignation. Putin then won the 2000 and 2004 presidential elections, but was ineligible to run in 2008 due to constitutionally mandated term limits. He was instead appointed Prime Minister by Dmitry Medvedev, who won the 2008 presidential election. In September 2011, Putin announced that he would run in the 2012 presidential election. He won the election in March 2012 and served an increased six-year term. He was elected to serve another six-year term in March 2018.

As President, Putin passed into law a flat income tax of 13%, a reduced profits tax, and new land and legal codes. As Prime Minister, Putin oversaw large scale military and police reform. He supported high-tech industries such as the nuclear and defense industries, and affirmed Russia's position as an energy superpower. However, he has been the subject of extensive criticism, particularly for his seemingly anti-Western sentiments. Putin is believed to be a person of interest in several high-profile international incidents as of 2018, among them the poisonings of dissidents and spies. He has thus far denied any involvement with hackers accused of attempting to manipulate the 2016 US elections that led Donald Trump to become the President of the United States. As of 2022, Putin has sought to restore parts of the former Soviet "empire" to Russian control, annexing the Crimean Peninsula in 2014 and currently engaged in a conflict with independent Ukraine "in defense of Russian interests". Now in its second month, Putin's unilateral offensive has drawn severe condemnation and stiff sanctions from multiple Western leaders and organizations, including Joe Biden.

Putin, alongside Mikhail Baryshnikov, Rasputin, Vladimir Lenin, Mikhail Gorbachev, and Joseph Stalin, appeared in the Red Square during the line in Ivan the Terrible's first verse, "I'm the first Tsar of all of Russia!"

Did somebody say real power?

Дa, you want to mess with me?

I spit hot borscht when I'm crushing these beats.

Blow it up like a tuba, while I'm balling in Cuba,

I'm a president in my prime. My enemies don't distract me.

The last man who attacked me lived a half-life, so comrade, come at me!

You don't know what you're doing when you try to bust a rhyme against a mind like Putin!

You'll find that the ex-KGB is the best MC in the ex-CCCP!

We're all Russians, no one's going to get their butt kicked

The way our space program's whipped NASA's ass with Sputnik!

Putin's quote at the end of Nice Peter vs EpicLLOYD 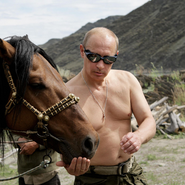 The full-size image of the shirtless Putin in the picture frame in Donald Trump vs Joe Biden
Community content is available under CC-BY-SA unless otherwise noted.
Advertisement