Sir Winston Leonard Spencer-Churchill, KG, OM, CH, TD, PC, DL, FRS, RA was born on November 30th, 1874, in Woodstock, England. He was a British statesman and the Prime Minister of the United Kingdom from 1940 to 1945 and again from 1951 to 1955. Churchill was also an officer in the British Army, a non-academic historian, a writer, and an artist. He won the Nobel Prize in Literature and was the first person to be made an honorary citizen of the United States.

After the Conservative Party lost the 1945 election, Churchill became Leader of the Opposition to the Labour Government. He publicly warned of an "Iron Curtain" of Soviet influence in Europe and promoted European unity. After winning the 1951 election, Churchill again became Prime Minister. His second term was preoccupied by foreign affairs, including the Malayan Emergency, Mau Mau Uprising, Korean War, and a UK-backed coup d'état in Iran. Domestically, his government laid great emphasis on house-building.

On January 15th, 1965, Churchill suffered a severe stroke that left him gravely ill. He died at his London home nine days later, at the age of 90, on January 24th, 1965, 70 years to the day after his father's death. Named the Greatest Briton of all time in a 2002 poll, Churchill is widely regarded as being among the most influential people in British history, consistently ranking well in opinion polls of Prime Ministers of the United Kingdom.

Pass me a cigar and a large glass of brandy.

I'm about to take you out prematurely like your family!

I'm the Rhyme Minister, fresh in a hat and dinner jacket!

You look like a mix of EpicLLOYD and a Pringles packet!

(Ha!) I was saving the planet from an axis of darkness

While you were back home opening national parks, yes!

You were born asthmatic; you're going to choke hard,

While I wake up every day and chain smoke cigars!

Any way you want to fight, I'll fight ya, and I'll beat ya, see?

I might be battling you even though I'm toasted,

But tomorrow, I'll be sober, and you'll still be roasted!

Steady there! I don't think it's very fair

For a British Bulldog to melee with a Teddy Bear!

(Ha!) You're no man; you're an overgrown Boy Scout!

I should stuff you in a pram just so you can throw your toys out!

They put your fat head on a mountain to save face,

But if Rushmore was a band, then you'd play bass!

Look at Roosevelt! The dude's about to lose the bout to Churchill!

If a bullet to the chest won't stop you, my words will!

Whatever shit you throw at me, I'll just return to sender!

I'll battle to the end, and I will never surrender!

Throw the full weight of my wit against your Bull Moose bullshit! 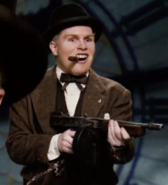 Winston Churchill and his Tommy Gun

Churchill T-shirt ($22.00)
Add a photo to this gallery
Retrieved from "https://epicrapbattlesofhistory.fandom.com/wiki/Winston_Churchill?oldid=1458584"
Community content is available under CC-BY-SA unless otherwise noted.