Wonder Woman battled Stevie Wonder in Wonder Woman vs Stevie Wonder. She also made a cameo appearance through reused footage in The Joker vs Pennywise. She was portrayed by Lilly Singh on both occasions.

Wonder Woman is a fictional superhero created by DC Comics. She is an Amazonian princess from Themyscira and the daughter of Zeus. As a result of winning a competition she was originally exempt from participating in, she is given a new uniform and the name "Wonder Woman." She then heads off to discover man's world, taking up the alias Diana Prince. Her main gear being her boomerang tiara, the Lasso of Truth, and her bullet-deflecting bracelets; she also owns an invisible plane. Wonder Woman would go on and face many foes including the Cheetah, Giganta, Ares, Maxwell Lord, and various others. She is also a core member of the Justice League, and is considered the third-most iconic DC character, after Superman and Batman, as well as the most recognizable female superhero in general. She was famously portrayed on television by Linda Carter and on film by Gal Gadot in the DC Extended Universe, starting with Batman v Superman: Dawn of Justice.

She appeared alongside Batman and Superman in the Joker's first verse, during the line "I make the Justice League look like just a bunch of super schlubs!"

Wonder Woman fly, I'm about to tell you why:

My rhymes are signed, sealed, and delivered on time!

You a bald has-been; I'm in my Amazon Prime!

I'll tell you what I say! You bit your style from Ray!

The grin and the shades and the king cobra head sway!

Gods made me out of clay, then they broke the mold!

I'm like Geena Davis, in a justice league of my own!

I just called to say that you need to ditch the hair beads!

But don't be scared, I let bats down easy,

So you don't gotta worry 'bout a thing, Little Stevie!

Well, I'm a woman who wonders what you're thinking!

Some of your records make me wish you started drinking!

Even if I stick to the best selections,

Look, I don't wanna judge a Talking Book by its cover,

But of the vegan buffet, you're a Full-Time Lover

And a part-time father, from what I've discovered!

Rhymes signed, sealed, delivered; they're fresh and on time!

I'll get this out the way: you stole your shit from Ray!

Some of your singles make me wish you started drinking!

It's the double W, looking so fly!

Worst thing about being blind, you can't see how hot I am

Those beaded dreadlocks fill me with dread,

That you'll smack me in the face with your ??? head!

If you get a call going, you'll talk my ear off

Tell you what I say, you stole your whole shit from Ray,

From his shades to his grin to his cobra head sway

Haven't written a braid joke yet - could I have an extension?

What's going on with your hair? I'm not certain.

It's like you're permanently walking through a beaded door curtain! 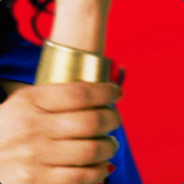