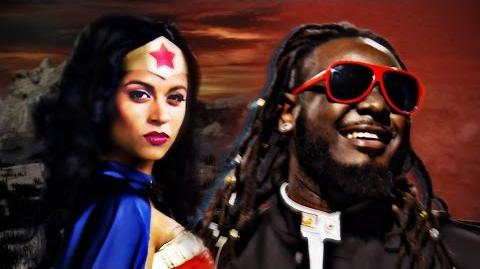 Money In My Truck

Wonder Woman vs Stevie Wonder is the sixty-seventh installment of Epic Rap Battles of History and the ninth episode of Season 5. It features Amazonian warrior princess and DC Comics superhero, Wonder Woman, rapping against blind musician and singer, Stevie Wonder. It was released on November 28th, 2016.

Wonder Woman fly, I'm about to tell you why:

My rhymes are signed, sealed, and delivered on time!

You a bald has-been; I'm in my amazon prime!

I'll tell you what I say! You bit your style from Ray!

The grin and the shades and the King Cobra head sway!

Gods made me out of clay, then they broke the mold!

I'm like Gina Davis, in a justice league of my own!

I just called to say that you need to ditch the hair beads!

But don't be scared, I let bats down easy,

So you don't gotta worry 'bout a thing, Little Stevie!

But you have sucked for a few thousand years!

(Hey!) I'm a man who comes from a higher ground,

I've been spitting out hits since both Fingertips,

So use the tip of your fingers and read my lips!

How you gonna talk about a bat being blind? (Why?)

You need to echo-relocate to the fourth of July

Because you're Ms. Independent, or at least you try,

But your first story is you, running off with a guy!

(Okay!) Now let me tell the truth 'cause I know you got the lasso!

You got that wack flow! Suffering Sappho!

I'm the ceremony master blaster with the bars,

And I got more Grammys than your panties got stars!

Well, I'm a woman who wonders what you're thinking!

Some of your records make me wish you started drinking!

Even if I stick to the best selections,

Your ignorant questions could never cause as much pain

As never knowing how stupid you look in your airplane!

You're a misguided, C minus on the Bechdel test joke,

And my worst song is better than your best TV show!

Look, I don't wanna judge a Talking Book by its cover,

But of the vegan buffet, you're a Full-Time Lover

And a part-time father, from what I've discovered!

You couldn't walk in my shoes, so stick to your re-boots,

With plots so thin even I can see through!

It's not a superstition; I believe you got dissed!

Not even your tiara's coming back from this! (Yeah! Haha!)

Rhymes signed, sealed, delivered; they're fresh and on time!

I'll get this out the way: you stole your shit from Ray!

Some of your singles make me wish you started drinking!

It's the double W, looking so fly!

Worst thing about being blind, you can't see how hot I am

Those beaded dreadlocks fill me with dread,

That you'll smack me in the face with your ??? head!

If you get a call going, you'll talk my ear off

Tell you what I say, you stole your whole shit from Ray,

From his shades to his grin to his cobra head sway

Haven't written a braid joke yet - could I have an extension?

What's going on with your hair? I'm not certain.

It's like you're permanently walking through a beaded door curtain!

You got the stars and the stripes all up in your tailpiece!

You look bad; that's what the Superman tells me!

I stick to the truth 'cause I know you got the lasso!

I'm the ceremony master blaster with the rhymes,

And they're sealed and signed and delivered on time! 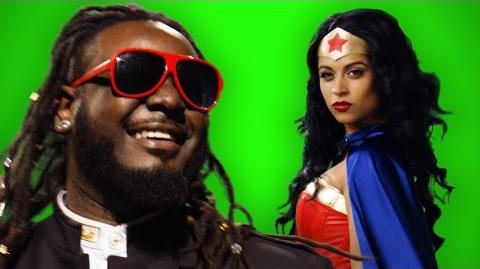 Wonder Woman vs Stevie Wonder - ERB Behind the Scenes
Add a photo to this gallery
Retrieved from "https://epicrapbattlesofhistory.fandom.com/wiki/Wonder_Woman_vs_Stevie_Wonder?oldid=1492717"
Community content is available under CC-BY-SA unless otherwise noted.