The Wright Brothers battled the Mario Brothers in Mario Bros vs Wright Bros. They are a duo consisting of Orville Wright and Wilbur Wright, and they appeared again on Ted "Theodore" Logan's t-shirt in Lewis and Clark vs Bill and Ted. They were portrayed on both occasions by Link Neal and Rhett McLaughlin, respectively.

The Wright Brothers, Orville Wright, born on August 19th, 1871, and Wilbur Wright, born on April 16th, 1867, were two American brothers, inventors, and aviation pioneers who are credited with inventing and building the world's first successful airplane in Kitty Hawk, North Carolina. Together, they became national heroes, and inspired imaginations around the world. Orville died on January 30th, 1948, and Wilbur died on May 30th, 1912.

Salutations, this is the official bio of The Wright Brothers. I am Wilbur and this is my brother Orville. We are the first men to successfully have a controlled flight in the sky, isn't that right, Orville? Yes, it is Wilbur! Excellent Orville. Hooray Wilbur! We're from Ohio, but this exciting event happened on December 17th, 1903 in the town of Kittyhawk, North Carolina. What a wondrous day, Orville! It surely was Wilbur! Then, after that we continued to build and tweak until we had created The The Wright Flyer III which I, Wilbur, flew for 24 miles in 39 minutes 23 seconds, while Orville stayed on the ground and watched. That's correct Wilbur. Thank you, Orville! Pardon me Wilbur, but when will it be my turn to fly? Orville, you're a better watcher than a flyer. No, Wilbur, mommy says I should get to fly too! Orville, the planes cannot support the weight of two men and I called pilot! But, Wilbur, I'm the one that got us into the bicycle business which made us think about the mechanics of flight. Shut up, Orville! No, YOU shut up, Wilbur! Excuse us, we tend to get carried away. The point is, we are both the first men of flight, right Orville? I said shut up, Wilbur!

The Wright Brothers, along with the Mario Brothers, appeared on Ted "Theodore" Logan's t-shirt throughout the entirety of the battle.

[Note: Orville is in light brown, while Wilbur is in dark brown. Both brothers rapping at the same time is in regular text.]

We're the Wright Brothers, and there can't be no other!

We stayed up all night, playing Donkey Kong.

We don't need to fight. We're the fathers of flight!

Conquer every level of your 2-D scroller! 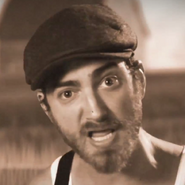 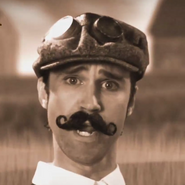 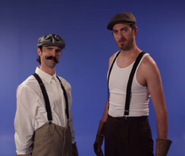 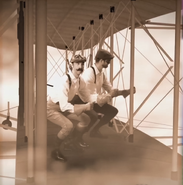 Wilbur and Orville Wright on their biplane 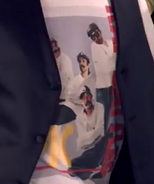 Orville Wright on a quarter

Wilbur Wright on a quarter
Add a photo to this gallery
Retrieved from "https://epicrapbattlesofhistory.fandom.com/wiki/Wright_Brothers?oldid=1472739"
Community content is available under CC-BY-SA unless otherwise noted.