Yev Belilovskiy (Russian: Ев Белиловский) is a Russian-born actor, director, producer, editor, grip, and member of the Epic Rap Battles of History crew. He has worked as a lighting and rigging technician since Hitler vs Vader 3, having worked on twenty-three battles to date. He portrayed a gangster in Blackbeard vs Al Capone and a member of Gordon Ramsay's production team in Gordon Ramsay vs Julia Child.

Yev Belilovskiy as a gangster

Yev Belilovskiy as a member of Gordon Ramsay's production team 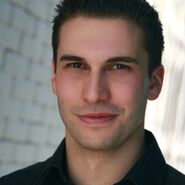 Belilovskiy's YouTube avatar
Add a photo to this gallery
Retrieved from "https://epicrapbattlesofhistory.fandom.com/wiki/Yev_Belilovskiy?oldid=1208574"
Community content is available under CC-BY-SA unless otherwise noted.