Zulu warriors made a group cameo appearance in Shaka Zulu vs Julius Caesar alongside Shaka Zulu. They were portrayed by Klarity.

Zulu warriors were warriors led by Shaka Zulu in the Zulu army. They were often referred to as the Impi, which means a group of armed men. The Zulu are most known for their cowhide shields and stabbing spears. Their biggest battles were against the British Empire during the late 19th century.

The Zulu warriors initially appeared with Shaka Zulu during his first verse, completing three of his lines by shouting "Zulu!", "Shaka!", and "To you!" They later appeared again in Shaka's second verse, where they could be seen in their distinctive bull horn formation.

The Zulu warriors in the bull horn formation 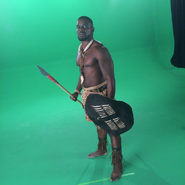 A picture of a Zulu warrior posted on ERB's official Instagram account
Add a photo to this gallery
Retrieved from "https://epicrapbattlesofhistory.fandom.com/wiki/Zulu_Warriors?oldid=1331002"
Community content is available under CC-BY-SA unless otherwise noted.